United Utilities has been ranked among the top 20 companies in a new climate change business leaderboard for the UK.

EcoAct, the international climate and sustainability consultancy, has published a leaderboard that ranks FTSE 100 companies on sustainability reporting performance, with United Utilities ranked 17th in the list.

National Grid, Centrica and SSE were also in the top 20, reflecting a growing awareness among utilities to radically cut carbon emissions.

However, overall the report makes for sobering reading, with a clear message that UK businesses are not going far enough in implementing critical steps to limit carbon emissions.

With the Intergovernmental Panel on Climate Change (IPCC) reporting a less than a 12-year window to limit global warming to 1.5°C, and the UK government’s recent net zero emissions law requiring the country to bring all greenhouse gas emissions to net zero by 2050, it is critical that the commercial sector urgently transforms their operations.

The report also reveals that only 8 per cent of FTSE 100 companies have attained carbon neutrality, with only a further 10 per cent making the commitment to do so, highlighting the enormous performance gap needed to be filled in a short space of time.

“What has become crystal clear over the last year is that the climate emergency is no longer a distant concept,” Stuart Lemmon, Managing Director, EcoAct. “In our ninth year of examining climate performance of the UK’s largest companies, while we have seen progress, change is simply not happening fast enough. It is now imperative that companies urgently step up to their responsibilities to drastically reduce carbon output.”

Undertaking similar sustainability performance reporting across the CAC 40, IBEX 35 and the DOW 30, EcoAct’s FTSE report suggests that the UK is lagging behind some other economies – for example in alignment or commitment to the Task Force on Climate-related Financial Disclosures (TCFD) – and advising that there is much work to do for the UK to meet its ambitious new role of “international leader” on climate action.

In addition to utilities, companies representing the FMCG, food and beverage and retailing sectors demonstrated strong performance, with Unilever claiming top position in both the UK report and when considering overall international rankings across the French CAC 40, Spanish IBEX 35 and the US DOW 30.

Marks & Spencer took second position, followed by Tesco at number four, and Mondi, the packaging major, at joint fifth place with the Coca Cola Hellenic Bottling Company. Also of note in the report was the first fossil fuels company, Royal Dutch Shell, entering in at number nine, rising from 31st position only a year ago.

The number of consumer-focused companies in the top 20 indicates a growing realisation by these industry sectors of increased climate awareness among the general public and the mounting demand for action. Pressure from the investor community is also increasingly a driver for companies to act in order to safeguard future interests from the long-term impacts of climate change.

In addressing an area that has been the focus of some recent controversy, EcoAct’s report also shows that the number of FTSE companies purchasing carbon offsets has doubled – from 12 per cent to 24 per cent in the past year - indicating a growing awareness of the need to reduce carbon footprints in absence of 100 per cent carbon neutral solutions.

“Carbon offsetting absolutely has a place as part of a carefully considered carbon emissions reduction plan where a company is unable to reduce certain operational emissions,” Lemmon said.

“As an internationally recognised market mechanism to help achieve carbon neutrality, carbon offsetting can play a significant role when not all emissions can be reduced in the short-term. Providing they are well-conceived and rigorously verified, offsetting projects can help deliver the promised carbon reductions whilst improving lives and supporting sustainable development.” 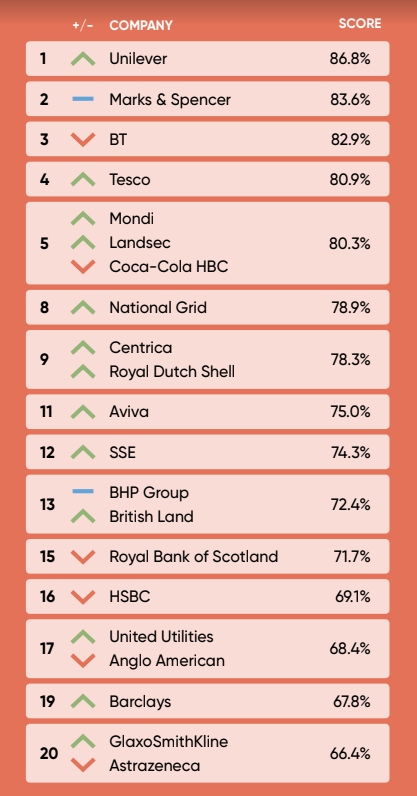