As Wessex Water nears completion of a Ãƒâ€šÃ‚Â£26M scheme to upgrade Weston-super-Mare sewage treatment works to increase storage and improve the treatment process, Matt Wheeldon, head of wastewater strategy, explains how the scheme was identified and the delivery challenges involved 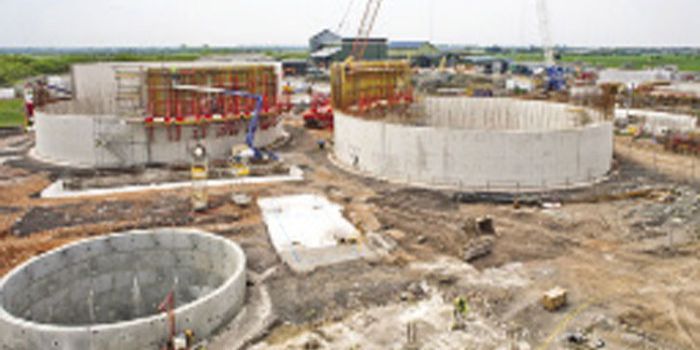 A view of the sewage treatment works under construction

For the past 14 years bathing water quality at both Weston-super-Mare main beach and nearby Uphill slipway beach has passed mandatory bathing water standards. However, with the introduction of the revised Bathing Water Directive in 2015, which has much tighter quality standards, it is predicted that both beaches will fail to achieve the required minimum standards of the new European directive.

The quality of the bathing water is affected by a number of contributory factors ranging from agricultural and urban run-off, stormwater discharges from combined sewer overflows (CSOs) and animal pollution such as from seabirds and dog fouling.

Trying to ascertain the main source of pollutants was a key part in assessing how bathing waters could be improved in anticipation of the tighter environmental standards. In order to ensure investment was targeted at the right pollutant source scientists were commissioned to complete the country’s first ever comprehensive study of DNA extracted from samples from the bathing water.

The microbial source tracking (MST) study, managed by Wessex Water staff, required a series of sampling at different times, weather conditions and tide states and then isolating the DNA of bacteria found in the bathing water samples. MST studies have been used in other fields of investigation, such as forensics, for a number of years, but this was the first time such analytical techniques had been this extensively used in the UK water industry.

Samples were taken at the point used by most bathers as determined by aerial photography. The actual samples were then taken at around 300mm below the surface. They were then tested for the presence of bacteria at Wessex’s laboratory in Saltford near Bath. Subsequent additional testing was then carried out at the Environment Agency’s (EA) lab for MST tests in order to determine the bacteria’s origins - be it cattle, birds or humans.

The conclusions of the study were that a significant level of bacteria were identified as being of human origin and so it was clear that improvements to the sewage treatment works and sewerage system would improve the bathing water quality.

However, this is not the only cause of pollution. Further catchment work has been undertaken by the EA to target sources of agricultural run-off identified by the MST surveys.

Good bathing water quality is a key ingredient to attracting tourists to coastal towns so it was essential that Wessex Water played its part in improvements to ensure North Somerset’s beaches were ready for the new legislation.

The investments being undertaken by Wessex Water at Weston-super-Mare consist of three main elements:

The first two elements are currently just being finished at the sewage treatment works at a cost of £26M. The investment comprises a new secondary treatment stage using activated sludge lanes, an intermediate pumping station, two additional final settlement tanks (each 31m in diameter) and four additional storage tanks (each 28m in diameter) for stormwater attenuation during heavy rainfall.

Hydraulic modelling of the sewerage system and the additional storage at the STW predict that spills will be reduced to three times a bathing season on average. In addition, the ultraviolet disinfection process is being upgraded to modern medium pressure lamps to provide the required bacteriological kill, but using use 75% less energy than the existing high pressure lamp arrangement.

The ground conditions at the STW are poor, which meant that all significant concrete structures had to be piled up to depths of 15m. Timing of the piling operation had to be just right to avoid both the wintering bird population and tourist season.
However, once it started, 1,150 piles were successfully positioned in a matter of 16 weeks.

Dean & Dyball (part of the Balfour Beatty group), the principal contractor, has faced fairly extreme weather conditions over the past year. Strong winds hampered crane usability and extremely wet summer conditions also caused a few delays with a waterlogged site. Despite these obstacles work was well managed and was able to be kept on schedule. The new plant is expected to be fully operational by Christmas, well ahead of the regulatory target date of March 2013. It is planned that MST testing will take place for a further two bathing seasons so that the relationship between bathing water quality and the performance of the new assets can be monitored.

Removing such surface water flows requires any foul misconnections to be remedied first, before finding somewhere where the clean surface water can be directed to. This is not easy. Weston-super-Mare was originally confined to the higher land, but has spread on to the flat, low-lying land, which was served by an extensive rhyne system.

Over time, development has built over the land drainage channels leaving no choice for stormwater other than to be connected to the combined sewer system. However, extensive housing development proposals to the south-east of Weston-super-Mare may actually be part of the solution rather than exacerbating the problem. Such is the extent of the development plans that the whole land drainage system needs to be reconsidered. Royal Haskoning, the consultant brought in by North Somerset Council to oversee the development’s master plan (and to ensure that it meets EA requirements) is proposing the construction of a ‘super-pond’ – designed to act as both an amenity feature for the future new community, but also, more importantly, as a massive attenuation lake.

Wessex Water is using this strategic opportunity to contribute to further upsize the ‘super-pond’ so that in the future, surface water sewers can be redirected back to where they originally drained to – the land drainage system, as opposed to the sewage works. Schemes to achieve re-separation are currently being assessed and some implementation of redirection schemes are proposed for later in the current asset maintenance period, AMP5.

It is anticipated that this significant investment in Weston-super-Mare’s sewerage infrastructure will ensure the quality of famous beaches and bathing waters remain a popular draw for both locals and tourists for the foreseeable future.