Free passage remains the key design element for wastewater pumps to avoid blockages, but there is much more for specifiers to consider when choosing the perfect pump 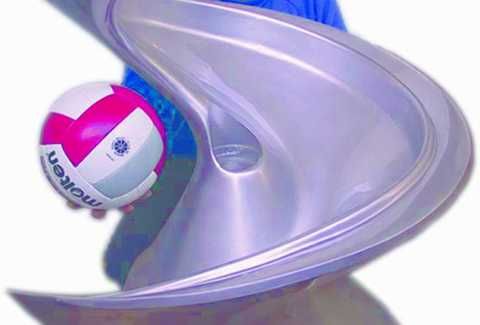 Free passage is defined by the size of spherical object that could pass through the impeller. This Hidrostal pump has enough free passage to pass a football

For wastewater pumps, which are required to deal with all kinds of effluent, reliability is key: the ability to keep running without clogging or blocking is the central demand for the equipment. Increased levels of fibre in today’s sewage, as products such as wet wipes are flushed down the toilet, have added to the challenge that has always been posed from solid objects accidentally entering the waste stream.

With wastewater pump blockages a frequent factor behind pollution incidents that have led to six-figure fines for water companies in recent times, it’s a crucial issue for utilities’ bottom line. So what are the design features that can prevent blockages – and given the AMP6 emphasis on Totex, how can they be weighed up against other considerations such as energy use?

Free passage – the size of the largest spherical object that could pass through the pump impeller without touching the sides – is traditionally the measure of how clog-resistant a pump is. The concept, which has been around for at least a century, is that if the space available through the impeller is larger than anything that can be flushed down a toilet, the pump should not block.

“Raw sewage is unpredictable and you never know what is going to be in it, so when it comes to free passage, bigger is always better - providing the geometry is right on the impeller,” says Andy Wilson, Hidrostal. “You only get parity, 100mm free passage out of 100mm, on a vortex pump, and they are not efficient at all. If you could have that with a high efficiency, that would be the ultimate pump, but nobody makes it – yet.”

Specifiers often play safe and opt for the largest possible free passage. Hidrostal offers single-vane screw impeller pumps with a free passage of 300mm – bigger than a basketball – which are an appropriate choice for asset-critical, inlet pumps close to the treatment works. Since a degree of compromise is always involved with pump choice, the size of the pump is a key variable when making decisions about efficiency and design, explains Wilson.

“Sometimes on smaller pumping stations you can obsess about saving half a kilowatt on a small pump, but if it blocks every week, you’ll just lose that money spending three or four hundred pounds for every site visit or rag out,” says Wilson. “So for those smaller pumps, yes, energy efficiency is a nice-to-have but the main thing is you don’t want to block the pump. For larger pumps, when you start getting over 20 or 30 kilowatts and beyond, energy starts to play a bigger part if it is utilised quite a lot.”

While it used to be common for pump buyers to specify 100mm minimum free passage, some pump manufacturers, notably Xylem, have marketed pumps with adaptive ends that can expand when they come across larger solids, which complicates the free passage comparison.

Beyond these basic impeller types, there are designs which claim to be more clog-resistant than others. One reason that wet wipes and similar fibres are seen as such as major challenge is that they cling to impeller blades, so that even if the throughlet is not totally blocked, efficiency is reduced. Backswept leading edges and relief grooves on impellers are seen by many as beneficial features, while some pumps boast self-cleaning mechanisms.

“Standard pumps can deal with standard sewage, but they are no match for the stringy, tear-resistant synthetic fibres of products such as wet wipes,” warns Hugh Vaughan of Landia UK. “Buyers should beware of claims of so-called ‘non-clogging’ impellers, which rags have no trouble in wrapping themselves around.”
Landia’s ‘chopper’ pumps, which use a knife system to chop and cut materials before they enter the impeller, are an example of another strand of pumping technology which combats tricky waste by grinding or chewing it up. Other variations include pumps that use the impeller itself as part of the cutting mechanism (although this “inevitably leads to problems” according to Vaughan) or pumping systems which include a separate macerator.

Grinder pumps are seen by the industry as a solution for sites where ragging is a particular problem, although high energy use typically makes them less suitable for universal use. Hard objects can also pose them more of a problem depending on the level of free passage available. A challenging scenario for all pumps comes when hard objects combine with rags, according to Hidrostal’s Wilson.

“Yes the rag is a problem, but quite often you find that the rag has fixed itself to a solid object,” he says. “Kids in particular play around toilets and little action men go down, ninja turtles, all these things go in, and then you find that the rag will start to build around that solid lump. So if you’ve got a pump with a small throughlet that’s able to handle fibres well, and you get a bunch of fibres that have got hard objects in the middle, you get hard blockage and that will churn that pump up. That’s why we always think we would rather get the whole lot through if we can.”

Of course, the design of the pump itself is only one consideration in determining which pumping stations end up being problematic for blockages. The design and arrangement of the wider pumping station and rising main is just as big a factor in many cases.

“We know that there are certain pumping stations that are problematic, and most of them are problematic because of a design issue,” says Andrew Ball of Grundfos. “It could be that it’s the wrong pump - the pump duty isn’t right for the pumping requirement – but it could be the civils design, for example the pump chamber could be too small, or too big, or there isn’t any benching, so the wastewater sits in the chamber too long or not long enough.”

Grundfos’s top wastewater pump is the S Tube, which is pitched at achieving both high free passage and competitive efficiency – but Ball admits that no pump can claim to be the “silver bullet” if the pumping station design is not correct. The way in which the pumps are controlled is also a big factor, he adds.
“Particularly for bigger size pumps, where free passage is naturally bigger anyway, the main factors are efficiency and control of the pump,” says Ball. “Control at that end-of-line station is very much about supporting the process at the treatment works and making sure you are not sending too much load and flow into the works. You need to make sure that you are not starting and stopping the pump a lot, you are getting the velocities and the start and stop levels right.”

Another consideration is the water company’s ability to respond to blockages: the largest fines received by utilities have tended to involve inadequate responses to problems. While the occasional pump failure could be viewed as unavoidable, a company that does not have the telemetry in place to show that a pump has failed, or allows its operators to ignore alarms, is asking for trouble. Investment in communications, people and training could therefore prove to be one of the best uses of money.

It’s unclear whether the Totex way of thinking which is being introduced to the industry in AMP6 will have a significant effect on pump specification decisions. However, approaches vary depending on who the buyer is. While a contractor on a capital investment project is likely to take factors around whole-life cost into account when buying a pump, an operator who needs a pump urgently will always just want something that works, says Grundfos’s Ball.

“I think no-one’s really saying what good looks like in Totex,” he says. “What is a good investment decision - should we invest in bigger pumping stations, different controls and spend £10,000, or should we just keep changing that £2000 pump every year and spend another £2000 on unblocking it?”

Awareness campaigns amongst the public, to reduce the number of inappropriate items being flushed into the sewers, could be considered a Totex-friendly approach, but it is certainly not yet one which has yielded quantifiable results. Perhaps keeping wastewater pumps blockage-free will remain a perennial challenge, but it is one that the industry has every incentive to tackle.