A valve upgrade has proved to be the key to keeping a 100-year dam performing its vital role in an area of natural environmental beauty in the Elan Valley.

Since 1904, water has been transported from the Elan Valley Reservoirs – created by damming the Elan and Claerwen rivers – to Birmingham.

The valley in Powys, Wales, is characterised by diverse flora and fauna and, as a result, the six Victorian dams built across the Elan Estate must be handled with the utmost care and consideration to protect the surrounding environment.

Caban Coch, the lowest dam in the sequence, has played a crucial role in carrying clean water 73 miles from Wales to Birmingham for over 100 years.

The dam has four discharge lines, 600mm diameter each, and their function is to meet Birmingham's water demands, release compensation flow downstream for the benefit of the environment, enable the dam to drain down quickly in case of emergency, and power a small turbine that generates electricity for the benefit of the local community.

In 2016, the discharge capacity was found to be affected due to silt that had built up over the past 15 years in the left-hand scour line. The problem was further aggravated by ageing valves that were reaching the end of their life, thus reducing the overall degree of control available to dam engineers regarding the discharge capacity.

Potential damage to the environment was therefore becoming inevitable, and the problem had to be addressed. Instead of discharging the silt through the unused valves and endangering wildlife downstream, Welsh Water employed a group of divers, who took almost six months to clear the silt.

There were several particularly challenging aspects of the process. There was almost zero visibility, and the dive was so deep that a decompression chamber was required on site.

Following its clearance, the Blackhall valvologists were called in to inspect the site, assess problems and offer a proposal for upgrading and enhancing equipment.

The crucial challenge for the valvologists was in coming up with a solution that was sympathetic not only to the environment but also with respect to the conservation and beauty of the dam, since the fascia of the valve chamber and the Victorian-built bridge below it were listed.

The combination of ageing gate valves used for isolation and flow control wasn't an ideal set-up, as gate valves are not for dedicated flow control. Using only gate valves for flow control can lead to turbulence and inaccurate discharge capacity, which can further cavitate the entire piping and valve arrangement.

As a result, the discharge system could fail if not upgraded with the right selection and combination of valves. After considering all the challenges, external factors and various technical aspects, Blackhall offered Welsh Water a technical proposal that would not only boost the discharge capacity but also increase the degree of control that Caban Coch would have on each of the four discharge lines.

The proposal comprised a detailed 3D structural drawing that showed Welsh Water how the valves would be arranged in the chamber in a way that would comply with all the spacing and safety standards. 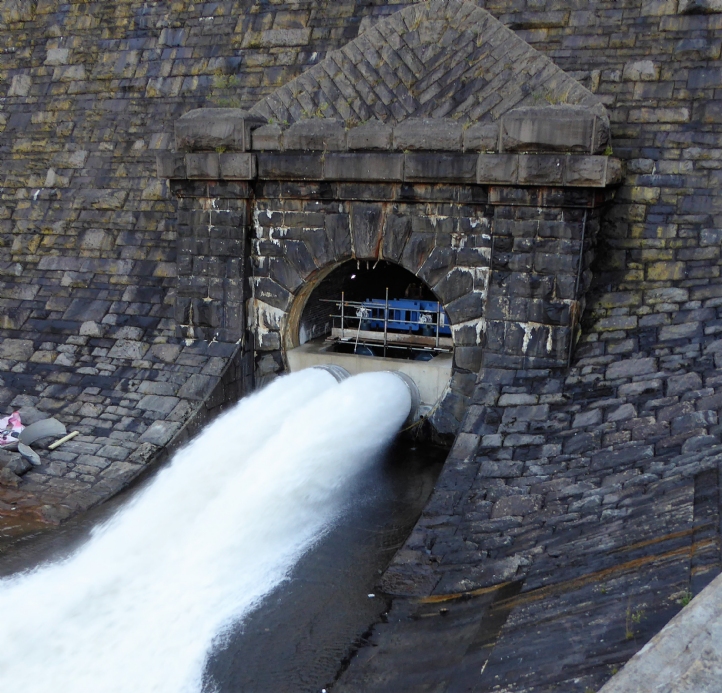 A key consideration was that the discharge footprint had to be designed in such a way that its dispersal pattern wouldn't hit and damage the surrounding Victorian architecture, including the bridge at the base of the dam. This was accomplished by fine-tuning the hoods and the inclination angles to guide jets into the safe zone of the stilling basin by achieving the perfect angle of incidence.

The valves were also painted in Welsh slate grey and emblazoned with a Welsh Dragon, in keeping with Caban Coch's natural and historical setting.

The performance of each valve is crucial for the safety of the surrounding environment – with such large volumes of water at stake, there is huge potential for catastrophic damage, but higher quality valves means decreased chance of failure and consequent environmental impact.

Blackhall is leading the initiative in creating 100-year asset life valves. By prioritising quality in design and materials, these valves not only reduce environmental risk but provide Totex benefits: the cumulative costs associated with continuously repairing and replacing cheaper alternatives end up far exceeding the cost of the 100-year valve.

The company also utilises a local supply chain. Taking all aspects of manufacturing and transporting new and often foreign valves manufactured in East Asia into account, the carbon footprint can be significantly higher than Blackhall's valves.

Welsh Water, which has targeted a reduction in its carbon footprint by 2020, has ensured the upgrade not only places an emphasis on the Elan Valley's environment and wildlife but respectfully preserves its Victorian architecture.