U Mole has been winning friends in Cambridgeshire after fixing a pipe for free at the Stretham Engine Trust site. 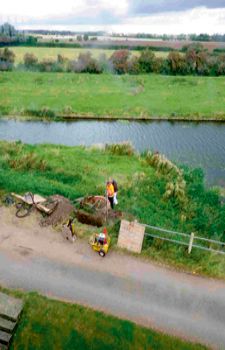 The PB30 compact pipe bursting system has been specifically designed for the replacement of small diameter sewer laterals and ducts with minimum surface disruption and disturbance to the client. Producing up to 28 tons of pull back on a special compact cable the PB30 can be broken into several easily manageable components to ease transport/assembly in difficult access locations and even man-holes. The use of the compact cable together with the compact bursting heads with integral pipe towing head enable the PB30 to burst in-line bends with no problem.

In the competitive world of utility contracting and equipment sales/supply altruism is something that might seem something of a rarity, particularly in the difficult economic conditions. So, why would anyone expect a equipment provider to undertake a pipe bursting project free of charge?

This was a question asked of U Mole following works recently completed on such a basis at the Stretham Engine Trust site on the Waterbeach Level near Ely, Cambridgeshire. Built in the 17th century, the Stretham Engine was one of a series of engines designed to drain water from Fenlands to create quality farmland. It is now the only remaining example of these machines that shows the ingenuity that was brought to bear to effectively manage the land drainage scheme and provide the required and highly prized farmland.

The machinery is also the only example left in the area with not only the beam engine that drove the bucket / scoop wheel water lift apparatus but also the boilers and valve arrangements and gauges that controlled the engine and its operation.

Run as a charitable trust, and as with many charity organisations in these difficult times, the Trust relies on members, donations and visitors fees to fund its continuation and when unexpected and potentially huge bills arise the question of survival is always there. This was the case recently at the Stretham Engine where a connecting duct passing from inside one of the buildings on the site to the nearby river was in need of replacement because it was not operating effectively due to heavy silting. The duct formed part of the river level monitoring system.

The Engine was designed to work so that water from a well at the site which drained the surrounding peat soils was lifted using a scooped wheel. This water was deposited into the adjacent Old West River. As part of the drainage operation, water level monitoring of the difference in level between the well and river had to be continuous to effectively operate the drainage system correctly. Within this set up there was a cable, linked to a float mechanism in the river that runs to a gauge inside the Mill that indicates the river level at all times. The duct within which the cable for this system ran was the one that was silt filled.

Having looked at the problem, the Trust approached U Mole in the hope it might be able to provide information on how to effectively replace the damaged duct without damage to these historic buildings and their contents.

Russell Fairhurst, managing director of U Mole, visited the site to see what was possible and found that a pipe bursting option would be applicable to the replacement required. Also, given the financial constraints on such an important historic site to the area, he agreed that the cost of the works was something that the U Mole company would take on itself and so agreed to complete the work free of charge. U Mole not only provided the machinery necessary for the project but also the workforce and new pipe. The job to replace the damaged 3in diameter cast iron pipe could be done using one of U-Mole’s PB30 cable-based pipe-bursting units. A 63mm diameter duct would be used as the replacement pipe.

The main difficulty of the project was the fact that the old pipe was blocked with silt and other detritus. This meant the usual simple method of passing the pipe burst cable through the old pipe was not possible. A rod was eventually pushed through the blocked old pipe so that it was subsequently possible to pass the burster rope through.

This in itself proved difficult as the rope, being of a larger diameter than the placement rod, was catching on something immediately outside the building.

An investigation proved the old duct had completely collapsed at this point just below the surface slab. After clearing this collapse the job went ahead smoothly to completion of the installation of the new pipe.

Fairhurst said: "It is vital to the history of the area to see how and why it became such an important farming landscape and how mills like this achieved that. As the Stretham Engine is the only surviving and probably best example of just how much effort and skill was put into creating this landscape, we felt that it was important to ensure its continuation without a heavy financial burden on the Trust."