Turning the circular economy into reality

The Europe-wide INCOVER project, which was among the winners at the Water Industry Awards 2018, shows how technology and collaboration can point the way to the circular economy

It’s a commonly held belief that the way to bring about a more innovative water sector is to foster a spirit of collaboration between companies at different points in the value chain and in different geographies.

In the field of sludge and resource recovery, there are few better examples of this in action than the European INCOVER (Innovative Eco-Technologies for Resource Recovery from Wastewater) project, which has brought on board an impressive array of SMEs, academics and researchers to develop technologies for the circular economy – and to demonstrate how these various technologies fit together into a workable ecosystem.

The three-year collaborative project, which started in June 2016 and will come to an end in May 2019, has been funded by a €7.2 million (£6.4 million) grant from the EU’s Horizon 2020 Research and Innovation Programme. Its stated aim is ambitious: “To move wastewater treatment from being primarily a sanitation technology, towards a bio-product recovery industry and a recycled water supplier.”

It is doing this through three demonstration-scale plants, which are detailed below, that show how valuable resources can be extracted from municipal, agricultural and industrial wastewater: not only energy, and nutrients such as phosphorus and nitrogen, but added-value products such as PHA (bio-plastics), citric acid, biomethane, biofertilizer, biochar and activated carbon.

The project consortium is made up of 18 partner organisations from seven countries, including technology and innovation consultancy Isle Utilities from the UK. Within that membership, there are eight SME companies that between them have developed an array of technologies, each a valuable piece of the circular economy puzzle – everything from solar-powered water treatment to nutrient recycling, microbiological solutions and applied biotechnology.

The members of the consortium have already tested the INCOVER technologies individually at lab/pilot scale (or to use the correct terminology, Technology Readiness Level 4-6). However, the innovation inherent in the project comes from the combination of all these separate technologies being applied to three real-world, large scale plants: enough to move the technologies up to a Technology Readiness Level of 7-8, where they can start being used in wastewater treatment plants of up to 100,000 population equivalent.

What’s more, the project also involves the development of a Decision Support System (DSS) for water utilities to select the best combination of technology for their technical and environmental requirements. And optical sensing, smart soft sensors and online operation systems are being used at all three demonstration sites to improve the efficiency of the processes still further.

The Spanish water utility FCC Aqualia is acting as the main utility partner for the project, which is fostering links with end users Europe-wide.

The plant for case study 1 is installed in the UPC Agrópolis campus, located at the municipality of Viladecans (Barcelona). The plant is composed of three horizontal photobioreactors (PBRs) of 11m3, each operating in parallel.

For nearly one year, PBRs were fed daily with 6.9m3 of urban wastewater and agricultural runoff, and the plant produced around 2kg per day of microalgae biomass dominated by cyanobacteria. The three PBRs are operated in series and fed with 2.3m3 of agricultural runoff in order to select and increase the concentration of cyanobacteria (in the first PBR) and to force them to accumulate polyhydroxybutyrate (in the second and third PBRs).

The biomass harvested from the third PBR is treated together with secondary sewage sludge in an anaerobic digester of 0,8m3 that currently produces around 150L of biogas per day. The sludge from the anaerobic digester (25 L/d) is subsequently treated in a sludge treatment wetland, while the water coming from the settler (2m3/d) is treated in nutrients recovery columns based in sol-gel coating and then disinfected by a solar-driven system based on ultrafiltration. The resulting effluent is applied for irrigation in a 125m2 field planted with sunflowers.

Case study 2 has been implemented in two locations: El Torno WwTP, Chiclana de la Frontera, and El Toyo WwTP, Almería, both in the south of Spain.

At El Torno, PHA production is made through a two-stage anaerobic-photosynthetic HRAP system. Two HRAP (High Rate Algae Pond) systems (32 m2) are operated with an innovative strategy developed at lab scale (5 litres), consisting of pulse feeding of municipal wastewater pretreated in an UASB reactor with molasses as COD source. After several weeks of operation, purple bacteria have been selected that are able to accumulate PHA.

Then, biomass separation is done by two clarifiers. After PHA production, the remaining biomass is transformed into biogas using thermal pre-treatment and an anaerobic co-digestion process. Agro wastes and sewage sludge are used as co-substrates. Biomethane is produced by an innovative biogas upgrading system, through photosynthetic fixation of CO2 as algal biomass using digestates as a source of nutrients.

At El Toyo, a demo full-scale 3,000m2 HRAP has been installed to obtain irrigation quality water. This HRAP system is treating pre-treated wastewater. This is the first full-scale HRAP of this size in the world that treats wastewater directly without any anaerobic or primary clarifiers.

Waste water is simply pretreated by a grit and grease removal, while a symbiotic culture of algae-bacteria is responsible for high removal of the organic matter (>95% as BOD5), N (>70%) and P (>85%). The HRAP is mixed by a paddle wheel or alternatively by a submersible mixer system patented by Aqualia, the LEAR, Low Energy Algae Reactor, which is able to reduce mixing energy by 80%.

After harvesting by flotation, the effluent is treated using planted filters with natural material for enhancing P and N recovery. Irrigation water is be obtained and reused with solar anodic oxidation disinfection and a smart irrigation system.

In case study 3, biomass waste is treated in a three-step process. First, a mixture of C-rich industrial wastes and grey wastewater are used to produce organic acid, e.g. citric acid and itaconic acid, via a yeast-based biotechnological process.

In the second step, after extracting citric acid from the mixture, residues are used for biogas production through co-digestion with industrial C-rich substrate. As an output of this process, biogas is produced for power generation or heating.

In the final step, the anaerobic sludge is being treated in a hydrothermal carbonization (HTC) process transforming waste biomass to valuable ready-to-use soil fertilizers.

The combination of these processes enables material and energetic waste recycling, thus contributing to closing life cycles in the bio-economy.

Process results are excellent and indicate that the INCOVER yeast-based process is a very suitable option for organic acid and biogas production. Current activities are devoted to optimising the yeast bioprocess.

This case study is being implemented in Germany. 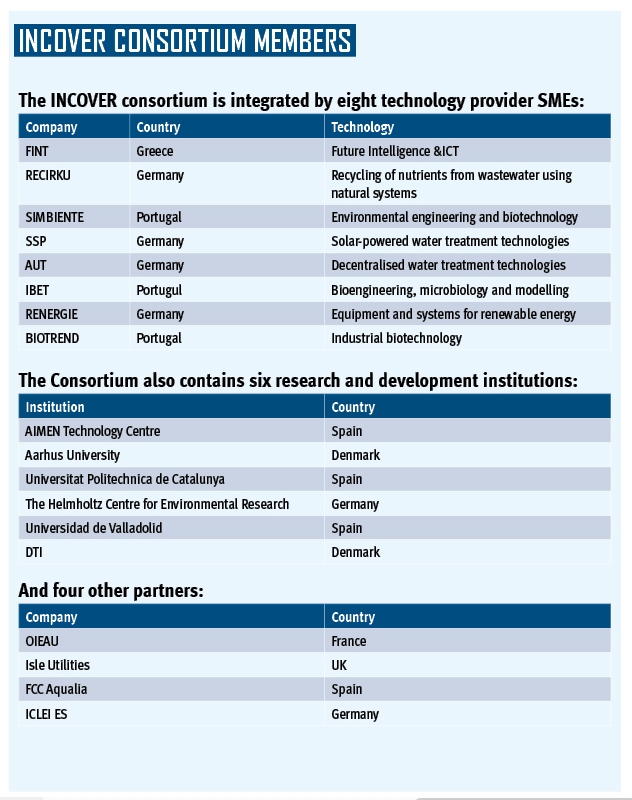 INCOVER, and its UK partner Isle Utilities, won Sludge & Resource Recovery Initiative of the Year at the Water Industry Awards 2018

This article originally appeared in the October issue of WET News