The tunnel boring machine – weighing 1,000 tons and measuring 180m – was delivered to Scotland in sections by sea from German manufacturer Herrenknecht. Named Daisy the Driller by a local schoolboy, it was launched on 6 July 2016 and spent 15 months tunnelling at a speed of around 2mm per minute, using a 5.51m cutting head with 25 cutters at the front.

The TBM had to cope with geology that varied from very soft soil to hard and abrasive sandstone and mixed faces. The team opted for a slurry shield TBM, which enabled them to control the pressure at the tunnel face and support the ground in front.

The Costain Vinci JV still needed to put in a significant amount of work on the design of the machine to ensure it could cope with the Glasgow geology. For example, due to the prevalence of old mine workings, the TBM was not only equipped with gas detectors but allowed any gas that infiltrated the working chamber to be collected and diverted through the slurry circuit or released through the ventilation system.

“It was really through the experience of the team members and the care and due diligence shown that we were able to overcome the challenge of the geology,” Costain’s Neil Grosset says. “It was not only in the design and specification of the TBM, which was very high-spec, but the execution of the job.”

Throughout the course of the tunnel work, more than 500,000 tonnes of earth, stone and clay was excavated, with the Glasgow Tunnel Partnership able to recycle over 90 per cent of that material either on the project itself or elsewhere.

When Glasgow was hit by severe flooding in the summer of 2002, one city councillor told the BBC: “We’ve got a 19th century sewer trying to deal with 21st century problems.”

This summer, after nearly two years in construction, a new sewer superstructure – the biggest in Scotland – became operational in the southside of the city.

The £100 million Shieldhall Tunnel, which runs 3.1 miles and connects to the existing network at Queen’s Park and Craigton, is the crowning glory of Scottish Water’s £250 million project to transform the wastewater system in the Greater Glasgow area.

Collectively, more than 100 workers spent 1.5 million working hours on the tunnel; the result is a 4.65m diameter tunnel that provides 90,000 cubic metres of extra stormwater storage – equating to more than 108 million litres – while 90 per cent of the effluent that had previously been discharged from the network’s combined sewer overflows (CSOs) into the River Clyde can now be treated at Shieldhall sewage treatment works.

As Scotland’s Environment Secretary, Roseanna Cunningham, said when opening the tunnel in July: “Communities across Glasgow will benefit for years to come from this latest extraordinary feat of engineering which lies hidden deep beneath the city.”

The 2002 floods had sparked the project into action. After discussions as to whether the fault lay with Scottish Water’s Victorian sewer network or a lack of capacity within Glasgow City Council’s storm drains, the two parties came together with the Scottish Environment Protection Agency (SEPA) to form the Metropolitan Glasgow Strategic Drainage Partnership (MGSDP) that year.

The MGSDP – which now counts Scottish Canals, Scottish Enterprise and Clyde Gateway among its long list of partners – set about investigating the hydraulic relationship between the city’s sewers, storm network and watercourses to gain an understanding of the mechanisms for flooding.

Over the course of 10 years, the group produced detailed computer models of the catchments along with significant survey works, and its ‘Glasgow Strategic Studies’ formed the basis of the Shieldhall Tunnel plan.

“What came from the flooding event in 2002 is you can’t really place responsibility on one party,” Dominic Flanagan, project manager for Scottish Water, says. “It’s everybody’s responsibility.”

Making use of the varied perspectives within the group, the MGSDP did not simply look to mitigate flood risk but explored the bigger picture, seeking possibilities to enhance the environment and boost growth for housing and commercial developments in the southside, which had been slowed by the lack of capacity in the network.

The group had initially considered whether to tackle the flooding threat with a series of large-scale, independent solutions: an 11,000 cubic metre offline tank, a 1.3km tunnelled outfall to the River Clyde and a new Kinning Park pumping station with upsized 5km rising main.

The Shieldhall Tunnel option – a gravity sewer with minimal ongoing maintenance costs – was ultimately deemed to offer best value and, unlike the alternative plan, avoided the need for major engineering works around key routes within the city centre.

The route for the Shieldhall option certainly had its advantages: it was intentionally indirect to maximise capacity while still able to pass a minimal number of residential areas, utilising three major parklands. However, there were significant hurdles.

The tunnel bifurcates the existing network at Queen’s Park and, en route to Shieldhall treatment works, crosses three roads – including the M77 – as well as the Paisley Canal, Glasgow South Western and Inverclyde railway lines and numerous sensitive utilities.

“If you think of the tunnelling in London and the recent work Thames has done, it’s very well charted grounds – they’re predominantly in chalks, Thanet sands or London clay,” Flanagan says. “In Glasgow, the geology is very mixed and can change rapidly. There’s not a lot of tunnels in Glasgow and there’s not a wealth of literature regarding the ground.” 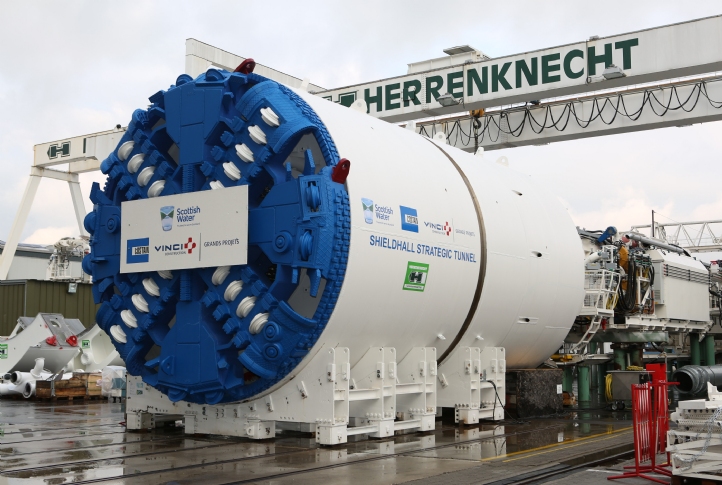 In the face of all these challenges, Scottish Water sought outside expertise through a Costain Vinci joint venture that combined UK and European civil engineering specialists with extensive tunnelling project experience.

“There was a recognition from Scottish Water that this project was outwith the skillset of our own internal framework suppliers, so the decision was taken to competitively tender the project,” Flanagan adds.

Explaining the particular skills of the main contractors, Costain project manager Neil Grosset says: “Vinci’s strength is very much in slurry tunnelling. Costain, as well as tunnelling experience, brought the UK element, dealing with the civil construction work and the interfaces with Network Rail and Transport Scotland.”

The Costain Vinci JV brought in AECOM to coordinate the design of the tunnel and its ancillaries, while Halcrow – later acquired by CH2M, which has itself now merged with Jacobs – worked client-side with Scottish Water to offer guidance.

“It was very much the experience of the teams and the tunnel machine operators that ensured this was completed successfully,” Flanagan says.

The Glasgow Tunnel Partnership, as the group was known, had a co-located office on site and Flanagan adds: “That was a key part for us – ensuring we were all working together. It was all about collaboration and risk management, making sure we were dealing with issues when they arose.”

For the rail and road crossings, Network Rail and Transport Scotland were invited to work at the office.

“There was a lot of time spent with Network Rail,” Flanagan says. “We had the approvals in principle in place but then it was down to the engineering capability and how we deliver while keeping the railway safe and operational up above us.”

As Scottish Water had opted for a gravity sewer, the depth at the opening of the tunnel needed to be relatively shallow, which presented particular problems when crossing the first railway line.

Grosset says: “The fall between the two connection points is only 4m, so you’ve got a 4m fall over 5km of tunnel, and the Paisley Canal railway was the point where we had the lowest cover between the crown and the existing ground level. Having a 4.7m diameter tunnel where you’ve only got 3.7m of cover is quite a challenge. The ground conditions under the railway were also challenging.”

Flanagan adds: “A lot of work was put into satisfying Network Rail that we had an engineering solution to be able to deliver that piece of work safely.”

There was a sizeable task in managing disruption to the public, too, but Scottish Water spent three years on a communication campaign to raise awareness and forge links with local community organisations.

“One of the key aspects was that very early on we recognised that we were going to be disruptive to that local community,” Flanagan says. “We actually built a new haul road into the site, which took away a lot of that major traffic problem from the local community. Doing that prior to commencing our work gave us a lot of credibility.

“It wasn’t just the tunnelling work though. Before the project could get up and running, we spent nine months infilling historic mine workings in three disparate areas along the route. It was a very disruptive bit of work – noisy, dusty – and that was the first bit people saw.

“Trying to get over that hurdle was difficult, but the record speaks for itself – we’ve done the largest communications campaign Scottish Water has ever undertaken and had no complaints from the local community.”

With minimal disruption, the Shieldhall project has – in Roseanna Cunningham’s words – “brought a 19th century structure into the 21st century”, and its success owes much to the initial planning phase.

“MGSDP set the direction for the project,” he says. “It’s all of the stakeholders collectively agreeing what is required via value management studies – it’s effectively a co-owned solution.

“That model of local authority working alongside the regulator and ourselves is now seen as a blueprint and has been starting to roll out into other Scottish cities as well.

“It means there’s no question – everyone’s bought into the solution and agrees it’s the right solution. That brings about efficient investment for the public pound.”