Home / Features / SuDS: a vision for the future

SuDS: a vision for the future

A change is taking place in attitudes to sustainable drainage systems (SuDS), says Alastair Moseley, honorary vice president of the Chartered Institution of Water & Environmental Management, as a new survey is published 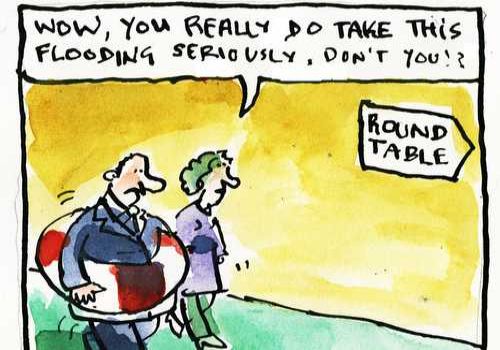 The SuDS: The State of the Nation Survey, commissioned by sustainable drainage specialists Hydro International as part of the Engineering Nature’s Way knowledge-sharing initiative, has just been published. In December, I was pleased to chair a Round Table debate on the current up-take of SuDS and the challenges we face in managing both floods and water stress in the UK.

Hosted by Hydro, the debate brought together a distinguished panel of local government representatives, industry specialists and drainage experts. SuDS: The State of the Nation is a much-needed initiative to highlight current thinking and concerns about the implementation of sustainable drainage. SuDS is not just another drainage technology, it is a complete philosophy that is absolutely integral to urban design and development. There are barriers to overcome, but some of those barriers are perceived rather than real.

Hydro has been visionary in driving this initiative forward with the Engineering Nature’s Way website, one of a number of important knowledge-sharing forums for SuDS in the UK. Raising awareness of SuDS’ potential, both among professionals and the wider public, is critical and a number of panellists stressed the on-going need to work to fully understand what constitutes best practice techniques and to monitor and report on their performance.

With so many inspirational drainage experts and leaders in the room to share their considerable experiences, it was clear that a sea-change is happening. If we look back just 10 years, a great deal has been achieved already. That was something that all the panel agreed on, I believe.

The survey highlighted concerns amongst the Lead Local Flood Authorities (LLFAs) that many still feel insufficiently prepared to take on their new role as SuDS Approving Bodies (SABs) as part of the Flood & Water Management Act 2010. They are concerned about funding shortages and even feel that the Government might not be committed to long-term implementation.

This view was strongly refuted by the Defra representative on our panel, John Bourne, who emphasised, quite rightly, that much can, and has, already been achieved with SuDS without the need for legislation. Indeed some forward-looking local authorities and water companies are taking a lead to produce their own design guidance and there are already some exemplary SuDS schemes in the ground. These range from major surface water management schemes on new developments with a practical mix of natural and proprietary features, to local schemes where local communities are engaged and involved – even to individual householders through downspout disconnection and the use of water-butts.

I believe we must still work together as an engineering and scientific community to develop the best possible national standards for SuDS in England and Wales. As the survey shows, many local authorities have a way to go, and the standards will help and educate them to oversee the implementation of practical solutions which will maximise the use of SuDS across the country. When we have the standards we must make sure that they are used consistently – which is why we need the SABs up and running.

Nevertheless, we are going to need time to develop the standards properly and it is the right thing that we do not rush into it. In the meantime, if the experiences and guidance developed across the country can be incorporated into the standards, then that is to the benefit of everybody. It is also important to develop and monitor performance on pilot exemplar schemes and the panel agreed Government funding in this area would be welcome as well as continued research into the wider social and economic benefits of water sensitive urban design. A strong theme of the discussion was that delivering SuDS successfully depends most of all on effective co-operation and partnerships between different agencies.
Within local authorities, that might mean between the SAB, highways and planning departments. It also means building effective working relationships between local authorities, water companies, the Environment Agency and other stakeholders – in particular the local community.

Panel members Jeremy Jones from JRJ Consulting and David Evans, associate director, Ove Arup & Partners and Ciwem shared their experiences of SuDS schemes with Welsh Water that have delivered huge benefits to the local community and helped to deliver water-sensitive urban regeneration (see WWT December 2012). Those schemes had enthused and engaged local residents in recognising the value of water and the potential of surface water management to build better neighbourhoods.

David Schofield from Hydro Consultancy outlined its exciting SWiM initiative, which promises to take integrated water management a step further for business and deliver significant returns on investment by storing and re-using rainwater.

In my view we are ignoring the obvious potential to capture and store water through SuDS systems within our urban environment. For this reason I believe that there has never been a more important time to keep the debate about SuDS alive and to ensure that we encourage the right vision for SuDS in future. The survey results can be downloaded at www.engineeringnaturesway.co.uk, where a report and video of the Round Table panel can be viewed.