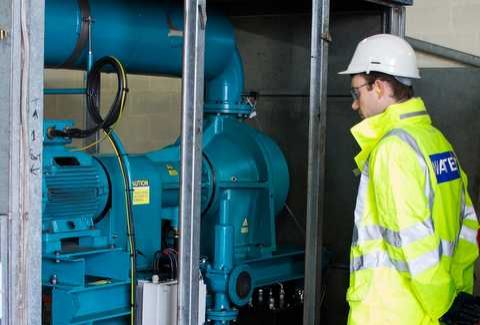 An inspection of the Lontra Blade Compressor at work

Severn Trent is set to reap significant energy savings after successfully trialling an innovative alternative to traditional blowers and compressors in its wastewater operations.

The midlands utility spotted the potential in Lontra’s innovative Blade Compressor as an alternative to the blowers and compressors which are used to pump air into wastewater to feed the micro-organisms that clean it.

As such, it undertook an extensive site trial and performed exhaustive tests that have proven the effectiveness of the equipment as a game changing solution for the global water and wastewater industry, delivering a step change reduction in electricity usage, maintenance costs and CO2 emissions.

Severn Trent’s wastewater treatment works operate around the clock, handling more than 2.5 billion litres of wastewater every day. Operating and maintaining the vast network of sewers and treatment works is a huge and resource intensive engineering challenge. It requires regular, large scale investment to maintain the quality standards demanded by regulators, politicians and customers.

The activated sludge process relies on the injection of air into wastewater to encourage the large scale growth of natural bacteria that break down impurities it contains. The traditional compressors, or “blowers”, used to inject air into wastewater use vast quantities of electricity, costing Severn Trent alone over £9M a year. This is more than half the entire cost of wastewater treatment in the region. Across the UK staggering 1% of the entire country’s total electricity usage goes to wastewater treatment and aeration.

Given the cost of electricity consumption – and the associated CO2 emissions – for a long period, Severn Trent Water had been investigating alternative solutions with lower energy costs, improved operational efficiency and reduced environmental impact. Their answer eventually came in the form of the Lontra Blade Compressor.

A modern innovation to maximise efficiencies

The Blade Compressor is a step change in air compressor and blower technology, best imagined as a piston and cylinder, but with the cylinder wrapped around.

With a traditional piston and cylinder machine, as the piston drops down in the cylinder, it draws in air above it and, as it goes up again, it compresses air in front of it.

As the Blade Compressor’s piston, or “blade” rotates, it draws in air behind it in the same way as the piston dropping down in the cylinder.

As it gets back to the starting point, it has drawn in a complete volume or air behind it. Yet unlike the traditional piston and cylinder that has to stop and change direction, the blade passes through a disc and the volume of air that was trapped behind the blade is now in front.

This means that it has an almost continuous cycle of drawing in air behind and compressing air in front. A new geometry that is quieter, smoother and most importantly, far more efficient.

In the case of Severn Trent Water, the first step was to work out just how important the Lontra technology could be to its business and so the company worked for over a year with Lontra on a study evaluating its entire wastewater estate.

The knowledge gained from this study allowed Lontra to take a fresh look at the challenges faced in wastewater treatment and to design a solution specifically optimised to the needs of the industry as a whole.

The results were so encouraging that Severn Trent agreed to part-fund a full scale trial alongside the Carbon Trust in a real time production environment at Worcester Wastewater Treatment Works. Interestingly, this was where the first large scale wastewater aeration system burst onto the scene almost a century ago.

The Blade Compressor was first run at Worcester in September 2012. After running full time as a ‘duty blower’ without issue for more than seven months, Severn Trent acknowledged its core reliability and performance.

The site’s instrumentation and supervisory control and data acquisition system (SCADA) showed that the conventional blowers used more than 20 per cent more electricity to deliver an equivalent amount of air when compared to the Blade Compressor.

These remarkable results prompted Severn Trent Water’s chief executive, in a presentation of preliminary results in May 2013, to report that, were the Lontra Blade Compressor to be rolled out across all of Severn Trent’s wastewater treatment works, the company could save more than £1.8M a year in electricity costs. Not only this, but there would be a proportionate reduction in the company’s overall carbon emissions of three per cent.

The magnitude of the potential savings was enough for Severn Trent to consider a large scale replacement programme. To confirm the saving beyond doubt, it was decided that the on-site instrumentation for the Blade Compressor and the comparative blower should be upgraded to laboratory standard.

Consultant ABB was engaged to specify and supply the instrumentation of Orifice plates – compliant to ISO standard 5167 – which replaced the existing flowmeters being used across the plant. The data from this instrumentation was logged for seven months between June 2013 and December 2013 covering all conditions, from Summer to Winter, to give a view of the true saving potential of the Blade Compressor in a fully operational wastewater treatment works.

The upgraded instrumentation demonstrated that from summer to winter, over 7 months continual logging, the Lontra Blade Compressor used – on average – 21.2 per cent less electricity to deliver an equivalent amount of air when compared to the existing blowers at the facility.

Equally important to Severn Trent, as well as the crucial efficiency gains, was the compressor’s simple design. It enabled easy implementation since the compressor was designed with well understood and proven materials and engineering. The bearings are traditional and the rotor runs at low speed, being directly coupled to the motor without step-up gearboxes or belt drives.

This combination fits well with the needs of an industry that requires minimal downtime and long service life from its assets and by the end of the trial, the Blade Compressor had been running for more than 10,000 hours, the equivalent of more than three years of normal operation without issue, demonstrating its superior performance.

Manufacture of machines incorporating the Blade Compressor technology by Lontra’s partner Sulzer has now begun, with production compressors shipping to Severn Trent and their equivalents across Europe.

Energy demands and costs continue to escalate across all aspects of our global society, and businesses face increased competition as a result. Fast-adopted technology breakthroughs such as the new form of air compressor offered by the - now proven - Lontra Blade Compressor have the potential to provide the water and wastewater industries with a “triple win”, being oil free, energy efficient and reliable.