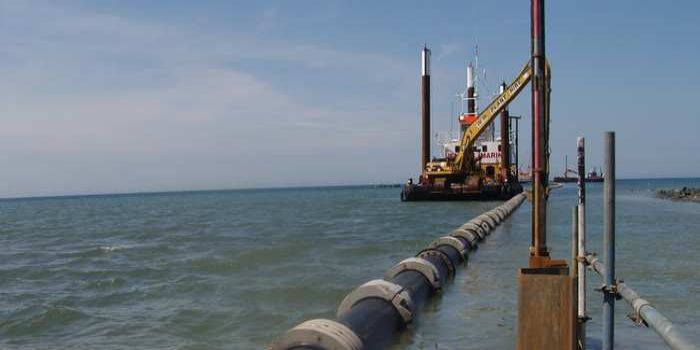 The town of Newport in Pembrokeshire is a popular holiday resort which attracts visitors to its golden beaches where water sports and nature activities can be enjoyed. In order to maintain this attraction it is important to ensure the highest standards of bathing quality on the beach and in May 2008 Newport Sands was one of eleven beaches in Pembrokeshire awarded Blue Flag status.

During an inspection in advance of the 2008 bathing season, by Environment Agency Wales (EAW), the existing long sea outfall constructed in the 1960s was found to be damaged. This resulted in an effective temporary repair being undertaken and in 2011 Dwr Cymru Welsh Water (DCWW) replaced the outfall at a cost of £2.35M as part of their AMP5 works to upgrade existing wastewater infrastructure.

Newport Parrog long sea outfall is part of the Newport catchment which is a predominantly rural separate system with a domestic population of approximately 1,300. It is situated immediately south of the Afon Nyfer Estuary and is within the Pembrokeshire Coast National Park. It is also in close proximity to the Cardigan Bay Special Area of Conservation (SAC) and the Newport Cliffs Site of Special Scientific Interest (SSSI).

The previous 250mm diameter long sea outfall extended approximately 620m offshore. During 2008, a fracture was identified near the Mean Low Water Springs (MLWS) level where flows were discharging to the sea at a point inshore of the consented discharge point.

The water quality had been continuously monitored since the fracture was discovered and EAW stated that it was necessary for the test results to improve for the Newport Sands beach to retain its Blue Flag status. DCWW determined that the original outfall was in need of replacement in order to meet the requirements of the Blue Flag status and to improve the water quality for the local residents and tourist beach users.

Cwm sewage pumping station (SPS) is the terminal station within the Newport catchment where all combined flows are received. This SPS is situated 60m inland behind the old lifeboat station, now a holiday home, and is directly connected to the marine outfall.

The capacity of Cwm SPS was increased following the construction of a relief sewer in stages during AMP3 and AMP4 to improve the unsatisfactory Parrog combined sewer overflow (CSO). Full treatment flows (FFT) of 14l/s are lifted to the Newport wastewater treatment works (WwTW), located approximately 800m south of the SPS, for preliminary, primary and secondary treatment.

Kaymac Marine & Civil Engineering were commissioned by Morgan Sindall to undertake the marine works. Kaymac used their experience in the marine environment to review the design alongside Arup with regards to its buildability and the logistics of sourcing and transporting the required materials to site.

The design was altered so that the original scope of importing thousands of tonnes of rock as backfill material could be replaced with the use of pre-cast concrete weight collars and mattresses that would be fitted to and around the pipeline. This provided a more cost effective and sustainable solution.

Access permission was given from Cwm SPS to the beach through the grounds of the old lifeboat station and a removed ‘Pembrokshire wall’, and over the Pembrokshire coastal path. The land-based plant included two 70t telescopic piling rigs, which were required to install over 530 Larssen sheet piles over the course of the project.

A temporary stone access ramp was installed to the beach to allow the plant access to the site. The ramp lay adjacent to an original 130-year-old listed lifeboat slipway, which could not be used for access as any tracked plant could cause damage to the structure.

Access and delivery for the pipe and space for the pipe welding operation became an issue as the works location was over a mile away from the nearest usable beach access slipway, and with a little space on the beach it was decided that the best option would be to import the fabricated whole pipeline, rather than attempt to weld individual sections of pipe together on the beach.  This option was also preferred by the local residents as it avoided congestion or the narrow access with deliveries during the busy summer months.

With careful planning and consultations with the Norwegian supplier, Pipelife Norge, the pipeline was sourced, fabricated to the required design and delivered via a tug boat from Stathelle in Norway to Fishguard Harbour (over 960 nautical miles).  Once delivered, the 640m long 630mm diameter OD PE pipe was split into three lengths.

Over 200 pre-cast concrete collars each weighing 320kg were individually attached to the pipe and steel sinking lids were fixed to the open pipe ends. These sinking lids included fixed valves which allowed the control of the influx of water and air into the pipe during the sinking procedure.
The design depth of the beach excavation required sheet piles to be installed by the two piling rigs. The sheet piles ranging from 10-12m in length were installed during the twice daily low tidal period. The ground conditions that were encountered required the installation of a suitable support propping system to enable the excavation works to be carried out in a safe manner.

A Notice to Mariners was issued to ensure that local people were notified of the sheet piles, as the location is very popular with fishing vessels and water enthusiasts.  As a requirement, the navigatable channel had to be kept open at all times during the project.

The seaward excavation was carried out by a dredging vessel with on-board GPS and three-dimensional dig software.  Both the beach-based and marine-based excavations were carried out simultaneously to meet the required depth and also counter the influx of excavated material caused by the rip tides and strong currents. Once a suitable weather window had been selected the excavation works was co-ordinated to allow the pipeline to be towed approximately seven nautical miles (with the 200 pre-cast weight collars attached) to the works location.

Due to the underlying water table, the beach excavation was always filled with water at any state of the tide.  This allowed the pipeline to be floated into position beneath the support propping system via a shore based manually operated tractor and winch system.

Once the position of the pipeline had been checked by a Kaymac dive team, the pipe was sunk by introducing water into the system and allowing the air to escape via the valves fixed to the sinking lids.  The sinking procedure had to be undertaken in a controlled manner to prevent damage to the pipe but also had to be carried out before the rising tide level reached the underside of the support propping system.

Divers ensured that the pipe was sunk accurately into the trench and that it was angled correctly to allow the later attachment of the diffuser head.  Once the position had been confirmed, the pipe sections were connected by divers using marine grade stainless steel fixings.

A 50t crane on board a floating work barge was used to lift 53 pre-cast concrete mattresses, each weighing 9t, around the pipeline along the majority of its length. These provide protection to the pipe from wave, tidal and river erosion, notably under the Afon Nyfer channel.

The outfall was graded to minimise the risk of air entrainment and air ventilation pipes were installed to dissipate entrapped air back from the outfall and upstream to Cwm SPS. The outfall was fitted with a single riser diffuser with a 630mm diameter removable top access flange and four 315mm diameter PE ports, each fitted with a Tideflex non-return valve to prevent backwash. The new outfall point is adjacent to the existing consented discharge point.

The excavation was then backfilled to the original bed level and the marine plant de-mobilized from site. The sheet piles were removed from the beach and where the design required, concrete was pumped underwater by divers to complete the project. A dye test was later carried out and proved that the outfall installation had been a success.

In addition to the installation of a new long sea outfall modifications to the existing inland Cwm SPS were required. The outfall was designed to convey a maximum storm flow of 270l/s but in dry weather flow (DWF) conditions it will only be required to convey 14l/s. To maintain self-cleansing velocity a new DWF flushing tank was installed using a 2.1m diameter Weholite tank, constructed by contractors Jones Brothers Henllan on land owned by DCWW alongside the SPS. A new manhole was constructed adjacent to the SPS where the treated flows from Newport WwTW are intercepted and which is equipped with two exit penstocks.

One penstock is open to the new tank and one is closed on the existing pipe to act as a bypass, allowing treated flows continuous access to the outfall if the tank is temporarily taken off line. The new flushing tank includes a 600mm-diameter automated penstock, which periodically opens to flush the final effluent through the new outfall pipe.

The tank also includes an overflow weir set at a level to permit treated flows continuous access to the outfall in the event of penstock failure. An ultrasonic level detector and penstock actuator were installed in an adjacent manhole, served by cable ducts from Cwm SPS control room to provide flushing control to operational staff.

The successful completion of this complex scheme sees a significant improvement made to the sewerage system of the town of Newport with the reinstatement of discharge to the consented outfall point and a larger capacity outfall allowing the improvement of Parrog CSO. This investment made by DCWW will support Pembrokeshire County Council in providing a clean and safe beach for this popular tourist resort and will also contribute towards maintaining the current Blue Flag status for the Newport Sands beach which is so vital to the community of Newport.