Home / Features / Lining triumph on the Isle of Man

Lining triumph on the Isle of Man

A challenging rehabilitation project on the sewers running under Douglas Harbour undertaken by Insituform Technologies has been hailed as a success. 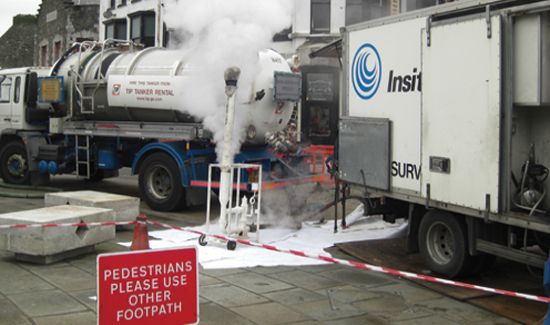 Insituform Technologies (ITL) has completed a high profile and challenging project to rehabilitate the inverted-siphon sewers that run directly under Douglas Harbour on the Isle of Man. The combined sewers transfer sewage from the South Quay catchment to the sewer network on the North Quay of the harbour and are in a very public location.

The client, the Isle of Man Water and Sewage Authority (WSA), was conscious of the need to protect the sewage transfer network beneath Douglas Harbour, providing a 50-year design life.

Inverted siphons are notoriously difficult to rehabilitate and this project brought with it a number of distinct challenges that needed to be overcome. The two inverted-siphon sewers, classed as Critical Infrastructure, were constructed under the harbour more than 100 years ago.

However, whilst Siphon A had continued to operate, Siphon B had been disused for some years, both sewers were heavily silted and encrusted. This created a high risk of the system blocking, which would have resulted in the discharge of raw sewage into the impounded inner harbour marina, creating huge environmental issues for both the harbour and the surrounding area.

Insituform was tasked with providing a solution that was both technically effective and cost efficient.

Last summer, an underwater sonar profile of both pipe lines was conducted to determine the pipe condition, diameter, length, the location of the bends, and the extent of the cleaning that would be required.

Following the survey work, ITL conducted a programme of extensive cleaning in both sewers.

This took longer than originally anticipated due to the heavy encrustation within the ageing cast iron mains and the tight bends in both pipeline configurations.

Following cleaning works it was determined that Syphon B could be rehabilitated to nearly its original diameter of 290mm, allowing for the liner thickness.

Due to the encrustation in Syphon A and lack of access it was considered that the sewer could be lined to a maximum of 150mm diameter. However, the reduced diameter and lined pipe bore would assist with achieving self-cleansing velocities in dry-weather flow.

Once cleaning was complete, ITL was able to perform a technical condition assessment of both sewers and determined the most advantageous method of rehabilitation.

After careful consideration by the client’s project team including the experienced technical team at ITL, it was decided that bespoke liners would be manufactured for each of the pipes.

Insituform has a qualified, well established manufacturing team located in Wellingborough, Northamptonshire who were tasked with the liner construction. The manufacturing team fabricated the liners using a specially-commissioned 2mm thick polyurethane pre-liner, which would facilitate the final installation.

Once manufactured, the liners were shipped dry to the Isle of Man along with the necessary resins for the wet out process.

The liners were then impregnated by the experienced lining crew residing on the island. Both liners were installed using a steam cure process.

This has the significant advantage of offering a smaller site footprint and was most appropriate for the conditions encountered on the Isle of Man site.

The lining operation of both siphons was high risk as a full camera survey prior to installation was not viable. However, the skills, expertise and perseverance of an experienced liner crew resulted in a successful installation of both liners on what was a very demanding and challenging site.

The other options would have involved replacement of the sewers.

Like-for-like replacement would require excavation of a trench at the rear of the impounded harbour using a jack-up barge and long reach excavator supported by a team of divers to fully replace the existing pipelines under water.

The presence of the existing utility infrastructure including a large diameter old gas main in North Quay would have created increased inherent risk and substantial cost implications.

It would have also resulted in deep excavation within the North Quay conservation area.

The rehabilitation of the pipelines was hugely successful for two key reasons:

• The rehabilitation process took a total of only two days, causing minimal disruption
to harbour users, the travelling public and local businesses

• The total cost of re-lining to the IOM authority was just £150,000. In comparison, the alternative excavation of the harbour bed carried an estimated cost of £900,000

In summary, the carefully planned and professionally executed lining solution presented by ITL was a major success for all involved.

The experience and expertise of the client’s project team including the entire team at Insituform and the company’s full range of trenchless (No-Dig) sewer rehabilitation techniques enabled the company to provide a very cost-effective solution in extremely difficult conditions.

John Beech, business development manager for ITL, says: “This rehabilitation project proved a major challenge in terms of the level of deterioration, degree of encrustation encountered and the complexities of the pipes to be lined.

“In addition there was the added pressure of the site being in a very sensitive and prominent position in the islands capital.”

Beech continues: “However, after careful deliberation with the client, selection of the appropriate materials and the correct lining methodology combined with the deployment of a very experienced lining crew, the work was completed successfully and to the full satisfaction of the client.”