Life in the old pipes yet...

Ã¢â‚¬ËœDevelop a new methodology to assess remaining life of ageing large diameter cast- iron pipelines' was the challenge given by United Utilities. Sandra Rolfe-Dickenson, technical director of pipeline engineering at MWH, explains what happened next 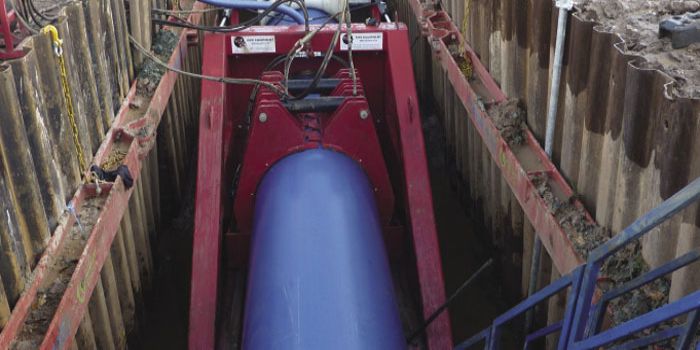 Large diameter trunk mains (LDTMs) are a key strategic asset for all UK water companies, and particularly for United Utilities (UU), as approximately 72% of its customers receive all or part of their drinking water supply through them. The Vyrnwy LDTM represents around 20% of the regional supply and services a population of 900,000.

Predominantly gravity-fed from Lake Vyrnwy via Oswestry water treatment works, the Vyrnwy LDTMs consist of three parallel 990mm-diameter potable water mains (two made of cast-iron and one of steel) each approximately 80km in length. Terminating at the Prescot Service Reservoir in Merseyside, they have been key to Liverpool’s water supply since 1892 and can carry up to 210Ml/day.

As part of UU’s continued commitment to improving water quality, the cast-iron sections of the Vyrnwy LDTM are being polyethylene (PE) lined during a 10-year rehabilitation programme. Structural adequacy and risk assessment of the LDTMs was needed to decide on the appropriate thickness of the PE lining. Martin Berry of UU Engineering explains, “Our dilemma was how to prioritise the necessary work, as condition assessment studies in recent years had given us differing estimates for the predicted life of the cast iron pipework on the same sections, ranging from zero to 100 years.”

In late 2010 UU Engineering challenged MWH to come up with a new approach to evaluating the structural adequacy of the cast iron pipelines of the Vyrnwy LDTM. MWH accepted the ‘mission’ and set about reviewing the very different assessments of predicted longevity of the pipelines given in previous studies, together with developing a new structural adequacy methodology for large diameter cast iron pipelines.

The traditional approach to this analysis sums the depth of external and internal corrosion pits and, having measured the existing pipe wall thickness, uses this to infer a time-to-failure based on a minimum allowable wall thickness.

However, this approach does not allow for other failure mechanisms occurring before pitting corrosion penetrates the pipe wall.

MWH’s review of research and historical papers identified that the most likely mechanism of failure for a large diameter cast iron pipeline is longitudinal fracture propagating from a corrosion pit acting as a point of stress concentration.

The MWH pipeline team concluded that it was not just the depth of the corrosion pit that was important but also its circumferential location. This, coupled with an innovative way of assessing the current flexural strength of the pipeline, was the key to developing the MWH remaining life methodology.

The notched samples were artificially flawed to varying depths enabling a relationship to be established between the flaw depth/wall thickness ratio and the load at failure.

The four-point test ensured a constant bending moment between the two central supports and increased the likelihood that mid-wall flaws and casting inconsistencies common to vertically pit, cast-iron pipes of this age were reflected in the measured strength of the samples.

The reduction of flexural strength with flaw size is an interesting phenomenon. As the project progressed, so our thinking developed regarding the potential position and depth of the critical flaw necessary to cause catastrophic pipe failure.

The most likely failure mechanism of large diameter cast-iron pipes is through ring-bending, either from external loading or internal pressure. This loading causes maximum bending moments at the crown and invert of the pipe section.

With the flexural strength of the pipe material decreasing with flaw depth, it became clear that it was not necessarily the deepest pit that was critical, but a combination of pit depth, its position, and the magnitude of the bending moment in the pipe wall.

MWH was able to assess the loads placed upon the Vyrnwy LDTM using factors that were appropriate to the age of the pipelines. The load-bearing capacity was calculated using the measured flexural strength of the cast-iron material, but reduced using the flaw to wall thickness ratio (the wall thickness being known from record drawings and the flaws being measured during non-destructive testing (NDT) fieldwork). This enabled a factor of safety against failure to be calculated (see Figure 2).

The bedding factor, Fm , was able to take into account the beneficial effects of over 100 years of soil consolidation on the Vyrnwy LDTM. This, coupled with the measured flexural strength, allowed for a realistic assessment of the current load bearing capacity of the LDTM.

Given the age of the Vyrnwy LDTM, pit depth measurements, and current wall thickness, a localised and general corrosion rate was calculated. These rates were used to estimate how long it would take for a corrosion pit to reach a critical depth at which the flaw depth to wall thickness ratio indicated there was insufficient remaining flexural strength in the pipeline to resist the assumed applied load at a given point along the pipeline.

This structural analysis methodology feeds naturally into a multi-criteria analysis, enabling the likelihood and consequence of failure to be assessed geographically along the pipeline.

The selection of the pipeline rehabilitation method is made on the basis of condition assessment and remaining life analysis of the existing pipeline, together with hydraulic considerations and the consequence of failure analysis.

The combined stress and remaining life methodology allowed an assessment to be made of the risk of failure of the Vyrnwy LDTM. Equally important to UU was the consequence of a failure occurring, so to assess the changing impacts of failure along the pipeline length, MWH also undertook a multi-criteria analysis (MCA) to rank and prioritise the pipeline lengths for rehabilitation.

UU Engineering then used this ranking to assess appropriate rehabilitation techniques for each section of the Vyrnwy LDTM. We normalised and weighted data collected from stakeholders to allow comparison and reflect relative importance, before being fed into the MCA.  This allowed diverse factors to be compared in a transparent and auditable way.

Berry adds: “MWH has developed a methodology for assessing the structural adequacy of large diameter cast-iron pipelines, which, given the number of variables in the soil/pipe system, provides a good approximation of the conditions seen in service.

Although, the methodology only gives an estimate of remaining life based on these variables, and cannot be taken as a definitive remaining life predictor, it does allow us to prioritise where, and what rehabilitation work is carried out, based on data gathered.”

He concludes: “Our goal was to provide an independent assessment of the results, failure models and provide a link with other UK water companies.

“The work and report done by MWH not only provided recommendations for pipe testing, both destructive and non-destructive, but also developed the combined stress methodology failure model as an innovative approach to the lifetime prediction of cast iron mains.”