Home / Features / Is advanced digestion worth it?

Is advanced digestion worth it? 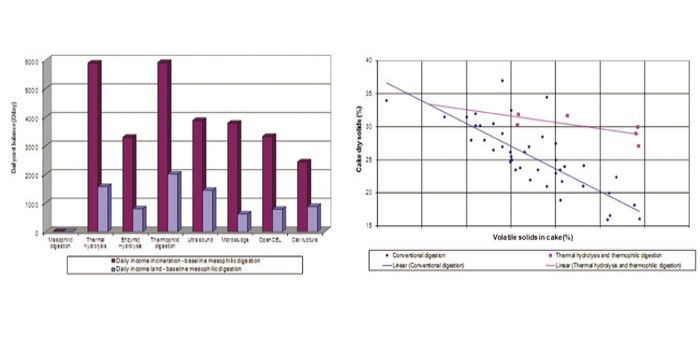 Historically, sewage sludge digestion was used to stabilise the sludge and reduce the odour emitted. Pathogen reduction, solids destruction and biogas production then became important and advanced digestion processes began to be developed.

The advanced treatment processes affect the digestion process by improving the conversion of organic material particularly cell matter to biogas. This is carried out using different methods such as high pressure steam injection, increased heating, physical and electrical rupturing of cells. Each process has associated consequences that change the economics of the treatment of sludge.

The economics of seven technologies have been compared by the author. An assessment has been made of the economics of increased biogas production and improved dewaterability against of the potential increased cost of treating the liquors.

The disposal route of the sludge cake is potentially the most influential factor in the choice of an advanced treatment process. Each process used to improve digestion has its advantages and disadvantages but all increase biogas yield by converting organic matter to gas and as such produce more energy and decrease the mass of solids for disposal.

This article looks at the capital and operating cost of a sludge treatment centre designed to treat sludge from a population of 700,000 people. A comparison of each of the seven advanced treatment processes is given.

Some processes have more full scale installations than others and thus the accuracy of the assessment is based on available information. Table 1 gives a summary of the technologies. The world’s largest advanced digestion plant is currently under construction at Davyhulme in Manchester. However, there are a number of factors influencing the installation of advanced digestion.

Budget capital costs for each of the technologies have been developed and benchmarked against that for conventional mesophilic digestion. The relative costs were calculated for a new build 700,000 population plant including digestion.

Thermal hydrolysis had the highest relative capital cost (approximately 25% above mesophilic digestion alone), which is not surprising as this technology is the most complex. The other technologies are more expensive than mesophilic digestion alone, but less than thermal hydrolysis. The critical measured parameter to determine the extent of organic matter conversion in a digester is volatile solids (VS) destruction. From this, the amount of biogas produced and the remaining solids for disposal can be assessed.

The cake dry solids (DS) following dewatering and the polymer usage for dewatering can be determined from extrapolation of experimental data based on VS destroyed. The cost of disposal of sludge cake after dewatering has been based on volume of wet sludge. The volume of wet sludge is based on the DS content of the sludge cake. Many tests and trials have been carried out on conventional mesophilic digestion however the trial information available for advanced digestion is very limited.

Graph 1 gives empirical data gathered by the author and used in this assessment. By predicting the likely VS destruction, the cake DS of each advanced digestion process can also be predicted.

Table 2 gives an assessment of the likely cake DS of the digested sludge for each treatment process. Note that bottom four technologies have only been applied to surplus activated sludge (SAS) with the SAS then blended with thickened primary sludge before feeding to digestion. Enzyme hydrolysis has been assumed to be a partial thermal process.

Energy production is based on using biogas in combined heat and power (CHP) plants. All the processes use the heat from the CHP to ensure that the digester maintains its temperature.

For thermal hydrolysis (TH), enzyme hydrolysis and thermophilic digestion heat energy from the gas is used as the method for advancing the digestion process. Electrical energy is required to power the various drives associated with each process.

For Ultrasound, Microsludge and OpenCEL, electricity is required directly as a source of energy to disrupt the sludge cells. For Cellruptor biogas is used as medium to condition the sludge.

The specific electricity usage for each process is shown in Table 2.

The concentration of ammonia in the digester is a product of the feed DS, feed nitrogen and the VS conversion. Higher feed DS combined with the higher VS destruction means that the TH process operates at the highest ammonia concentration.

“The hot water energy can be used to pre-heat the incoming sludge and this reduces the energy required from the stream, but there is still a requirement to provide additional steam from a steam boiler”

For the three thermal processes the energy balance is important. Biogas generated in the digestion process is converted, in a combined heat and power (CHP) plant, to electricity and heat energy. The heat energy from the CHP is available as around 20% steam if required and 20% hot water. Both the thermophilic digestion and the enhanced enzyme hydrolysis use the heat from the CHP and do not in normal operation require any additional heat from boilers.

In the case of thermal hydrolysis, the heat energy available as steam from a CHP installation is not adequate to run the process in normal operation.

The hot water energy can be used to pre-heat the incoming sludge and this reduces the energy required from the steam, but there is still a requirement to provide additional steam from a steam boiler and thus some of the biogas is diverted away from the CHP engines.

This reduces the amount of electrical energy available to a lower value than the theoretical maximum.

The daily income relative to mesophilic anaerobic digestion alone for the seven processes has been compared and the results are shown in Graph 2. The economics are very dependent on the sludge disposal route as all processes will tend to reduce the sludge volume for disposal.

As the cost of sludge disposal increases, then the economics of advanced digestion improves. This will be particularly apparent when the disposal route is to incineration.

It is interesting to note that based on the assessment carried out, thermophilic digestion appears to have a very positive impact on the balance sheet, relative to the extra capital cost (approximately 8% above mesophilic digestion) of the installation.

However, there are not many plants around the globe that rely solely on thermophilic digestion. The data for the assessment is taken from a single plant in Vancouver, Canada.

The conclusions of the research are: