In this CPD article, we look at how pumping stations can be best designed to deal efficiently with solids and sediment in the wastewater network 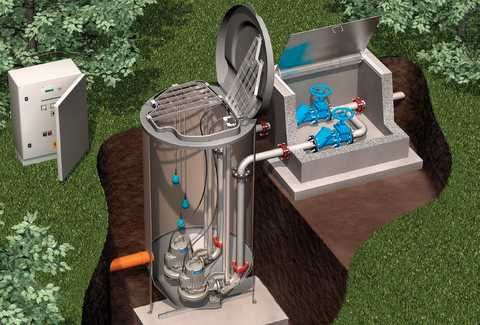 This CPD Article is provided in association with Xylem. In order to complete the CPD, read the article and then answer the questions in the CPD questionnaire. Closing Date: 1st June 2017. CPD credits: 1 hour

The aim of any sewerage system is to collect wastewater from residential, industrial, and service establishments and to transport it to a works for its treatment and safe disposal. Environmental and economic considerations dictate that this should be achieved without blockages, which require troublesome manual intervention, and with the optimal use of energy.

Pumping stations are a natural focus for attention in sewerage systems, since not only are they the site of many blockages, but the energy used by the pumps is the major cost involved in handling wastewater. However, while the energy efficiency of wastewater pumps has risen up the agenda in the last two decades, reliability is always the primary concern. This is because pumps that become easily clogged by sewage solids are ultimately inefficient, no matter how energy-efficient they may be when they are running smoothly.

Yet wastewater pumps do not operate in isolation. The effective handling of wastewater requires not only good pumping equipment, but a wet well and surrounding sewer system that has been designed to give the pumps the best chance to deal with whatever the nature of the effluent that comes their way.

The purpose of this CPD article is to explore some of the factors that are most important in the design of pumping stations - and pump sumps in particular - and to explain how better design can help the pumps to operate effectively without clogging.

In order to understand the challenge pumping stations face, it’s necessary to consider the different types of solids present in raw sewage. These include not only faecal and organic matter, in the form of gross solids or sludge, but other items flushed into sewers by users such as paper, rags and sanitary waste.

Because of the combined nature of the sewer network in the UK, our sewers also contain other types of solids which have entered the system with stormwater. This includes silt, sand, and gravel that has been washed or blown from unpaved areas, road sand, and grit from deicing operations or from the abrasion of roads, material from construction work, and litter such as paper, plastics and drinks cans.

Typically, in industrialised countries, wastewater contains between 100mg/l and 500mg/l of sanitary solids and between 50mg/l and 1000mg/l of stormwater solids. Although these average levels may appear low, the figures can hide significant variations. Moreover, it is important to recognise that with this level of overall solids in the system, any disturbance in the flow can lead to a rapid build-up of solids which can quickly spiral out of control.

A useful, albeit simplified, way of thinking about solids is to put them into categories based on their Specific Gravity (SG) and hence their buoyancy:

These solids move within the sewer system in very different ways. Fine, light material tends to travel in suspension, while heavier material travels in a rolling, sliding, and tumbling mode as bed load. The exact mode of travel depends on three groups of factors: the material properties of the solids (e.g. density, particle size and shape, size distribution, and cohesive properties), the properties of the sewer (e.g. size, shape, slope, and surface roughness), and the flow conditions (e.g. velocity, level of turbulence, and depth).

The heaviest solids, such as sand and gravel, are the main concern in the design of sewers, because they require the highest velocity in the wastewater and the highest shear forces (lateral force on the sewer wall) in order to get them moving. When designing a sewer system, a widely-used figure is that a wastewater velocity of 0.75m/s should be achieved at least once daily, and that 1.0m/s should be achieved at full capacity – although these figures are somewhat arbitrary as they are not adjusted for quantity of sediment or pipe size. Useful figures for shear stress are 1-2 Pa for foul sewers or 3-4 Pa for surface water sewers.

Other lighter materials, such as rags and sanitary waste, move more readily, so are not typically a concern for sewer designers. However, rags tend to agglomerate and become entangled when they roll on the bottom for a long distance, forming ‘ropes’ or ‘balls’ that may become a major hazard to the pumps further down the line.

Sediment movement in a pump sump differs from that in a sewer: the flow in a sump is less regular, in terms of both direction and capacity. This is because most wastewater pumping stations in the network are set to operate intermittently, with the pumps kicking in when the wet well is filled to a certain level. In between times, when the pumps are not running, the sump is acting as a settling tank.

The solids with an SG>1 settle on the bottom and accumulate in the still areas of the sump. If allowed to remain undisturbed, they may turn septic and cause odour problems as well as increase corrosion and release hazardous gases. They can only enter the pump if they are within the influence of the pump suction where the velocity exceeds the threshold of movement. Stagnant conditions in a sump, which result from intermittent operation, may cause granular solids and sludge to agglomerate or otherwise interact to adversely affect the transportation of sediment.

Neutral buoyancy solids (SG=1) are easily carried by the flow and, in general, are easily pumped away. Long, stringy materials, however, may cause pumping problems either by hanging on the impeller blades or by blocking the pump inlet. Most severe clogging is caused by ‘ropes’ that may be created in long sewers or possibly in a sump. If caught by a rotating impeller, the longest objects may catch other materials and become entangled with them to form such ropes. Since they seldom pass through the pump, these ropes tend to grow and become much longer than the individual pieces. They tend to hang at a pump inlet when the pump operates, obstructing the pump performance, and fall back to the sump bottom when the pump has stopped. At some point, they may completely block the pump.

The majority of pumping stations in sewer networks are circular in design and equipped with two pumps. Traditionally, sumps have been designed to provide ample space around the pumps to allow access for service personnel. However, the larger the sump, the more likely it is that it will become a settling tank for sludge and debris. The accumulation of sludge leads to the build-up of harmful gases and requires periodic desludging of the sump, which will increase operation costs. The optimal sump, in this context, should be small enough to prevent the settling of sludge yet large enough to avoid obstructing pump operation.

Pump manufacturer Flygt (a Xylem brand) has developed a set of design criteria for a self-cleansing sump by conducting laboratory tests on sediment movement. These tests have established that:

-The flat bottom area of a sump must be kept to a minimum and located directly under the pump suction
-All other surfaces must be vertical or steeply inclined – at least 45 degrees for smooth surfaces (plastics or coated concrete) or at least 60 degrees for concrete
-The distance from the pump suction inlet should be less than half the diameter of the inlet
-The pumps must occasionally operate to the lowest possible liquid level in the sump – that is, to the point of incipient air ingestion or “snore”
-The inflow should be prevented from cascading directly onto the pumps or in the vicinity of the pump inlet
-Neither the proximity of the walls themselves, nor the clearance between the two pumps, has any effect on pump performance

Sump diameter and bottom configuration are the characteristics that most affect the transport of solids. Because the suction effect of the pump inlet decreases rapidly with distance, it is important that the solids be guided towards the inlet. The position of the inflow to the sump is critical, and the free spaces have to be designed to form passageways to facilitate the movement of solids. Nevertheless, during the idle phase of a pumping cycle, heavy solids will settle to the bottom. To pump them away, the shear force over the bottom, which is induced by the suction of the pump, has to exceed a certain critical value, which is dependent on the sediment type. The closer the pump inlet is to the bottom, the greater the shear force scouring the sediment.

The floating solids, as with the settling ones, can only enter the pump if they are within the influence of the pump suction. Lowering the liquid level in relation to the position of the pump inlet is, therefore, an important factor. Occasionally running pumps to the minimum water level – or the beginning of snore – helps to maintain a sump free from floating solids. Here again, the comparatively large surface area in a standard sump is a disadvantage, as the floating solids can still be some distance from the pump inlet.

Meanwhile, neutral-buoyancy solids move readily with the flow currents in the sump. They tend to accumulate in the stagnant zones, and can become easily trapped by fixed objects, such as pipes and cables. Once more, the smaller the volume of the sump, the more effective the movement of the solids. As with settling and floating solids, tests have shown that most of the neutral-buoyancy solids enter the pump when the water level in the sump is at its lowest, just before the pump switches off.

A controller module can be used to programme the pumps to run down to the minimum level in the sump. Depending on the influx of solids, and thus the need for sump cleansing, this controller can force the pumps to operate to the point of snore as many times as required.

A flush valve - a piece of equipment which stirs up water in the sump at the start of each pump operating cycle – can also be used to make settled solids easier to pump away. Flygt’s tests have shown that such valves can enhance the transportation of solids significantly.

The need to transport wastewater, including all solids, through a sewerage system to treatment plants can only be met if pumping stations are as effective in handling sewage solids as the sewers themselves. Pumps that can handle solids without becoming clogged are obviously required, but pump sumps must also be constructed in such a way as to enhance the transport of solids. The following points are particularly important:

-Sumps can be designed with much smaller floor areas and with smaller clearances to the sump bottom and walls than conventional designs. This will reduce sedimentation and facilitate the ingestion of solids by a pump.
-Running pumps to the minimum water level from time to time will help to keep the sump free from floating solids.

Now answer the questions in the CPD questionnaire