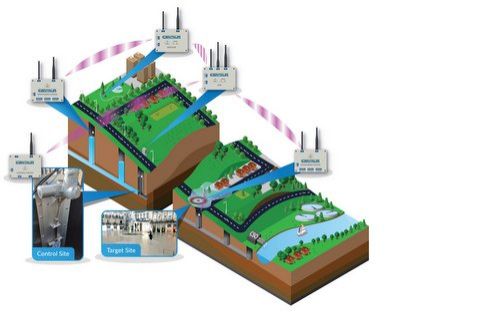 A diagram showing how CENTAUR holds back stormwater in sewers

As many sewer networks around the world struggle to cope in the face of extreme rainfall events, the need for new solutions is becoming increasingly urgent, with traditional means of expanding storage capacity not only costly but also space-intensive.

CENTAUR promises to help provide answers. The system, named Most Innovative New Technology of the Year at the 2018 Water Industry Awards, boosts capacity within the sewer network through ‘virtual storage’, using a gate to control the flow.

“The objective is to utilise the storage capacity that already exists within a wastewater network,” Environmental Monitoring Solutions Ltd. (EMS) business development director Dr Kieran Williams says. “We’re trying to be much smarter in the way we use the existing infrastructure.”

EMS is one of seven project partners on CENTAUR, along with the University of Sheffield, University of Coimbra, EAWAG (the Swiss Federal Institute of Aquatic Science and Technology), Águas de Coimbra, Veolia and gate manufacturer Steinhardt GmbH.

Described as an intelligent autonomous system for local flood risk reduction, the CENTAUR system was developed under a €3.5 million EU Research and Innovation grant for Horizon 2020.

It involves the installation of transducers at key points within the sewer network to monitor water levels and communicate that information to modules, which are placed on lampposts or in manholes, over a proprietary radio protocol. The modules then communicate with a central hub, which uses Fuzzy Logic-based artificial intelligence (AI) to control when and to what extent a gate installed within the network should allow water to pass through.

“As the level increases at the area you’re trying to protect, the gate will modulate further upstream to start utilising the storage available further up the network,” Dr Williams says.

The system relies on the proprietary radio protocol for communications because, Dr Williams says, GSM – the mobile phone network – is “just not reliable enough for the communication of data and to make these decisions”. Although CENTAUR does use the mobile phone network to connect to the hub to view the performance of the system through an online dashboard, the system would continue to operate if the GSM connection failed.

“The communication and control element is completely autonomous,” he says.

The AI has been designed to react to events as they happen rather than attempting to anticipate likely scenarios.

“We’re not predicting anything,” he says. “We’re not using big datasets for how the system has performed previously and behaved for different precipitation events. We’re not using that approach at all.

“As the network changes – if you add more paved areas, for example, or you’ve changed the hydraulic interaction within the network – the system will adapt because it’s only looking at how the system is performing at that time. It’s got a lot of headroom and will continue to adapt just because of the very nature of how it operates.”

Two deployments are underway in Portugal and France. The first began in September in Coimbra, the former capital of Portugal, where it has been serving to protect a UNESCO World Heritage site.

“The target – the area we’re trying to protect – is a square in the centre of Coimbra which has a church where the first two kings of Portugal are buried,” Dr Williams adds. “The sewer storage is approximately a kilometre-and-a-half upstream. What we’re doing is using the headroom that’s available there to manage the flood risk.”
CENTAUR has controlled flows flawlessly for over 60 storms to date and reduced levels at the target site by around 30 per cent. For areas such as Coimbra in which there is a specific area to be protected, there is the potential to add multiple gates in suitable areas of the network to create a cumulative effect.

Dr Williams also says CENTAUR should be used in conjunction with other flood mitigation measures, such as sustainable drainage systems, to maximise benefits.

“If we can stop getting the water into the network in the first place, that’s ideal,” he says. “Once it’s in the network, it’s about managing it in a much smarter way. It’s not meant to be used in isolation, it’s meant to complementary.

“If you had to build inline storage, for example, maybe you’d need half the size of the storage tank that you’d originally intended because you can complement it with SuDS and CENTAUR.”

With the three-year Horizon 2020 project concluding in September, EMS is now taking the product to market. Dr Williams says there has been interest from countries including Mexico, China, Chile, Australia and Canada, while sewerage undertakers in the US have been particularly keen due to the Environmental Protection Agency’s demands on cutting spills from combined sewer overflows.

“For large storm events, you are limited as to what you can do about it, but a lot of CSOs spill on relatively small storm events,” he says. “If you can keep the flow in the network as much as possible, obviously you’re having a direct impact on mitigating pollution.”

Dr Williams also said they are at an advanced stage in negotiations with a number of the UK water companies – little surprise given that the Water Industry Awards judges said CENTAUR is “just the sort of thing that the water industry needs to be using if it wants to improve performance in AMP7”.

“It was absolutely great to win the award,” he says. “The competition was really tough – we were up against global water utilities. The fact it’s been recognised is really fantastic.”

-This article appears in the July 2018 issue of WET News magazine.