Southern Water's £2.5 million project to replace an 800m stretch of sewer main in Kent was complicated by - among other issues - Brexit, World War II and ancient artefacts. WWT finds out how they managed to deliver against the odds

In mid-January, Southern Water was alerted to a problem with a sewer pipe near Manston Airport in Kent.

The airport had not been in use for almost five years, but a sinkhole had been spotted by Department for Transport (DfT) staff working there as part of the Government’s preparations for a potential no-deal Brexit just over two months later.

“If we left with no deal on March 29 and things started to back up around the ports, they planned to funnel 6,000 lorries to Manston and carry out checks at the airport itself to relieve pressure on the motorway network.”

The sinkhole had occurred around the rising main that takes sewage from 90,000 people in Margate to the treatment works at Weatherlees Hill, and investigations revealed that sulphuric acid had completely eroded the crown in one part of the 800mm, mortar-lined ductile iron pipeline.

Working alongside delivery partners Cappagh Browne and BTU (Barhale Trant Utilities), Southern Water quickly decided that adopting a ‘make do and mend’ solution would be pointless, instead resolving to replace an 800m section – some of which crossed the airport itself – with polyethylene.

To facilitate Operation Brock, Southern Water agreed to complete the work taking place within the airport by 29 March, with a target to finish the whole project by the start of the bathing water season on 15 May.

That schedule was challenging enough, but further factors complicated the matter significantly.

“During World War II, Manston was one of the most heavily bombed airports – so much so that at one point the cabinet were looking at pulling out of it,” Jon Yates, project manager at Southern Water, says. “That meant the risk of finding UXO [unexploded ordnance] was incredibly high.

“There’s also a high risk of finding pipe mines and fuel lines and all sorts of things that weren’t necessarily German bombs but put in by the Allies to protect the airport. I believe when the rising main was first put into this airport, they found in the region of 80 pipe mines.”

The area is also an archaeological hotspot, having played host to invading Romans, Vikings and Normans, so the team engaged University College London ASE (Archaeology South-East) at the outset.

“It seems like everyone throughout history passed through the fields where we were working,” Yates adds. “We were digging in a highly sensitive site with the potential for significant archaeological finds throughout the 800m replacement.” 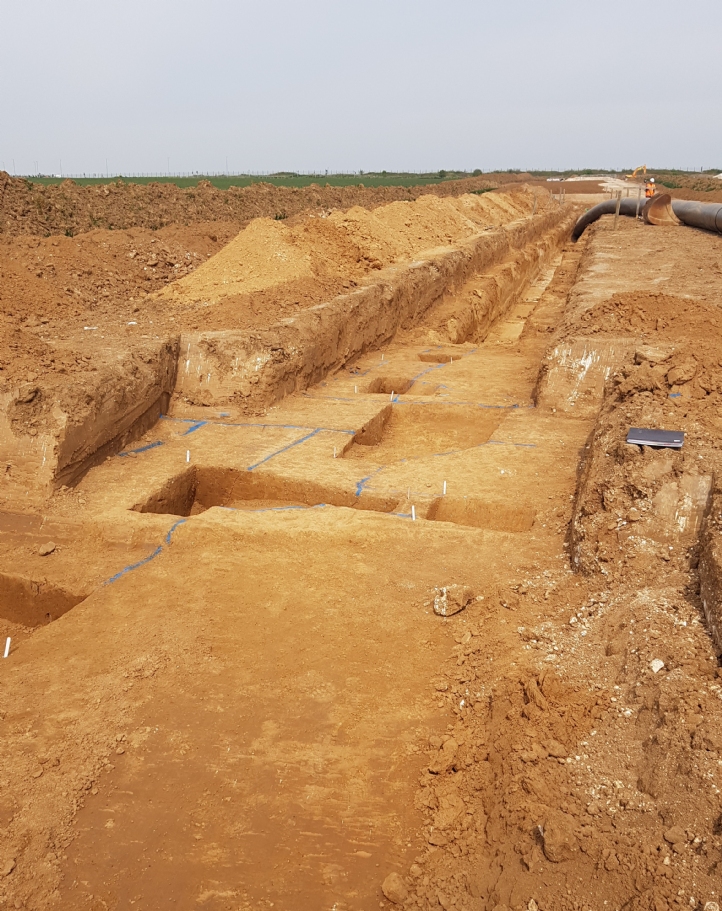 In common with many other projects in the region, Southern Water also had to take into account the ecological sensitivity of the area.

Due to the risk of groundwater contamination, the Environment Agency had designated it as an SPZ2 outer protection zone, but the primary ecological issue was that the sinkhole itself was in an area of heavily built-up scrubland.

“We found bank voles, lizards and all sorts of things that had to be moved prior to work,” Yates says.
To tackle the project, Southern Water adopted a new approach.

“We became aware of the pipe failure on 17 January and kicked into gear immediately with our emergency response, but we decided to do it differently this time,” Perkins says. “It was a scheme that might sit between departments – it was an ops reactive repair, but it was very large and wasn’t in our capital programme of works.

“So, for the first time, we decided to run it with a collective approach, bringing together Jon and the engineering construction side of the business with my ops speed-of-repair approach, and together we created the project team with our delivery partners, who were going to do most of the actual repair work.”

For Yates, the new approach meant a significant change of tack.

“Normally in my world I have more time to consider the things that might affect a project, like the UXO, the topography and history of the ground,” he says.

“We get a project, we go to our enabling team, they internally look at the risks associated with the area and, if there’s a UXO presence, we then request a formal desktop study, and that would kick off potentially a three-month period of work. On this project, to enable us to be off the airport for the end of March, we were carrying that out in three weeks.”

To meet their schedule without taking risks, the team had to not only increase speed but also reconfigure many of their working processes.

For example, the UXO specialists began with desktop studies as normal but, rather than waiting for a formal report, they would send out an email to the team as soon as any key risks were highlighted (Yates recalls one email, highlighted in red, that warned: “Whatever you do, don’t dig”).

They targeted the areas with the most pressing deadlines, keeping a UXO specialist on site to carry out a watching brief as the digging work took place.

“Our supply chain really stepped up,” Yates says. “It involved working at very late notice sometimes, with a phone call at 4pm to be onsite the next day at 8am to enable digging and weekend working.”
The archaeological experts were also present onsite while the trenches were excavated, and an ecologist looked on during the early phase.

“At times, we had our delivery partners and their crews doing the construction work being watched for unexploded munitions, watched for archaeology and at one point watched for ecology as well,” Perkins says. “It’s probably not what they were used to but it was what was required.”

The approach paid dividends: construction work to lay the new main began on 1 March, and the work within Manston Airport was completed by 25 March.

Their task was eased a little by the fact that much of the main working area had already been cleared through previous projects, but the final report, based on ground-penetrating radar, found that there had been 31 anomalies that could have been unexploded ordnance within the workspace. The report also showed there had been 200 high-explosive drops previously recorded within 500m of the workspace.

“It was after we’d got out of the airport that their official report came through,” Perkins says. “That’s how out of sync with the cycle we were.”

Had any significant unexploded ordnance been uncovered during the excavation work, that could have dealt a decisive blow to hopes of finishing on time. As it turned out, the worst that they uncovered was an old cast-iron fireplace.

“We were fortunate,” Yates says. “We did the right things at the right time and the right speed that meant we were able to continue. That said, two weeks after we were given the all-clear from our specialist, the works on the airport found a 40kg bomb that needed dealing with...”

The presence of the archaeologists also proved worthwhile, finding evidence of the prehistoric occupation of the land, including waste products of flint tool-making from the Mesolithic period (10000-4000BC) and other finds from the Early Iron Age (800-400BC) and Roman periods.

The sewer was eventually connected in on 15 May – the day the bathing water season officially started – after being held up for a week by weather problems, but otherwise the team managed to achieve all of their targets against some formidable challenges.

“The key for me was the format of the project team, with the skills from the different camps working towards a common objective,” Perkins says. “We delivered it extremely quickly and we did it in a safe way despite all the constraints. It was stressful but, because we were all on the same page, it didn’t feel overwhelmingly stressful.

“Ultimately, although Brexit didn’t happen at the end of March, the Department for Transport were happy that we fulfilled all our obligations, we almost hit the bathing water date, and the parish council and local community have been fantastic.”

This article originally appeared in the July issue of WWT