Correct installation wrings all the benefits from borehole drives 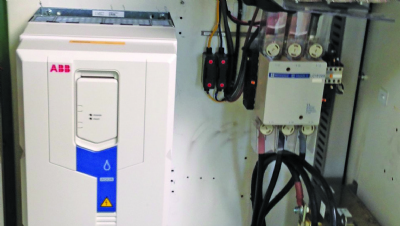 When it comes to water sources, groundwater in the form of aquifers holds several attractions for water supply companies compared to surface sources such as rivers. Where aquifers exist, they are usually accessible over large areas simply by sinking a borehole where needed. Groundwater also often requires less treatment than river extraction, for example, as it is filtered naturally.

Contractors installing borehole pumps can offer their water company clients a number of advantages by specifying and installing variable speed drives (VSDs) to run the pumps. One of these is the reduction in turbidity, a quality measure of how much particulate matter is suspended in the water.

Starting pumps with direct-on-line (DOL) or star delta starters tends to stir up silt from the borehole, causing turbidity, whereas using a VSD achieves a gradual ramp up of speed, avoiding turbidity from occurring.

The benefits of using VSDs on borehole pumps don’t stop at turbidity reduction. By running the motor to match actual demand, energy use can be significantly reduced – by as much as 50 per cent – compared to DOL driven pumps, which would always run at full speed. Periods where the system is ‘pumping to waste’ can also be dramatically reduced, saving even more energy.

Another advantage is the ability to vary output to comply with the terms of an extraction licence.

Consider, for example, a licence that specifies an extraction rate of seven mega litres of water a day. A water company might have one pump that could extract five mega litres a day. Adding another pump of the same capacity would exceed the limit. By using a VSD, the speed of the second pump could be varied to ensure the pumps’ combined output did not exceed the licence limit.

Depending on the extraction site, the pump motor may be located within the borehole pump itself, or at the head of the borehole connected to the pump by a shaft. Whichever method is used, there are technical challenges that must be addressed to ensure efficient and reliable extraction, as well as to reduce equipment wear and tear thereby prolonging the life of both the pump and motor.

Submersible and borehole pump motors present specific challenges because of their generally weaker insulation and typically long cable lengths. However, selection of the correct VSD, as well as possibly an output choke or sine filter, careful EMC planning and good installation practices can avoid these problems.

For instance, motors in borehole pumps may have a cable longer than 100 metres making it necessary to fit du/dt or sine filters. These are quite effective at reducing the rate of voltage change (du/dt) and the peak motor voltage to within pump manufacturers specifications.

Guard against interference and distortion

Other potential problems can include undesirable network distortion, which is possible if the VSD uses a simple diode bridge, especially at higher power ratings. Using low harmonic drives can avoid this.
High rates of voltage change can also lead to radio frequency interference, leading to poor electromagnetic compatibility (EMC).

Common installation mistakes made by contractors can compromise EMC through failure to provide correct earthing especially where junction boxes are concerned. Motor earth cables should be connected directly to the VSD earth, with no intermediate connections or cross bonding to junction box steelwork, for example.

Getting up to speed

Although VSDs are generally used to reduce speed, they may also be used to increase speed if required by the application, if there is enough motor power available. It is therefore necessary to check the limits for both the pump and the motor.

Another priority is to avoid critical speeds and vibration – the risk of the pump or motor reaching a critical speed increases when using a VSD. When running at fixed speed, the chance of the fixed speed coinciding with a critical speed is small. However, when the speed varies across a wide range, this likelihood increases dramatically. This can be remedied by programming the drive to lock out certain speeds or speed ranges from the continuous operating speed range.

Many borehole pumps are used in rural areas and are fed by generators either permanently or as a back-up. Keep an eye on the harmonic content, as generators might be an additional source of, or be susceptible to, harmonics.

Pump bearings are another factor. Pump manufacturers usually state that the pump should achieve a speed of around 30Hz in less than a second to build up a flow of water to lubricate and cool the bearings. Some VSDs offer software features such as a quick-ramp feature that allows a pump to reach its minimum speed as quickly as possible, extending pump bearing life and reducing unplanned outages.

When the quick ramp stage ends, a slower ramp can be used, ensuring minimal turbidity and smooth operation once the pump starts creating flow.

VSDs for borehole pumps are best introduced as part of the overall design for the borehole pump system to get the greatest benefit. However, retrofitting a VSD later can still bring many benefits and is a major option when considering optimising the performance of boreholes. In fact, the majority of VSDs installed on borehole pumps are retrofit projects.

Anglian Water is saving £2,000 a year on a borehole pump’s electricity costs following the installation of an ABB VSD on a submersible pump motor.

The borehole is one of two operated by Anglian Water, at separate locations, that feed the reservoir serving customers in Sudbury, Suffolk. Prior to fitting the VSD at Blackhouse Lane, both pumps were run at fixed speed all of the time but had to be turned off frequently as the reservoir had reached the desired capacity. Anglian Water suspected that this system was inefficient as it was pumping more water than was required. The frequent stopping and starting of the pumps was also causing excess turbidity in the extracted water.

The decision was taken to install a VSD on the pump motor at Blackhouse Lane. The drive alters the speed of the pump’s motor to top up the reservoir as required, while the borehole pump at Woodhall Road, without a VSD, runs at full speed to provide most of the demand. This has reduced the amount of energy used by the Blackhouse Lane pump motor by £2,000 per year. It has also reduced the turbidity in the extracted water to an acceptable level.

VSD retrofit pays for itself in just 12 days

In the most extreme cases, turbidity can make water extraction financially unviable. This was the situation facing one water supply company which was considering closing a borehole as a result.

The site in question uses two 90kW extraction pumps that were switched on and off as required. As the pump motors where connected DOL, each start created an excessive amount of turbidity that mean the utility had to wait 14 days for it settle out before it could start supplying water.

ABB installed a VSD on one of the two pump motors for a trial period. The drive was programmed to have stepped ramp periods to allow for lubrication of pump but reduce the stirring up effect of the silt at the bottom of the aquifer.