Smith & Loveless Inc., an international leader in off-site build sewage pumping systems and process sewage treatment equipment. With a global installation footprint that spans more than 70 years, tens of thousands of equipment installations and all seven continents, Smith & Loveless is increasing its presence in the United Kingdom. Despite its global success and reach, the medium-sized company is not an impersonal corporate conglomerate, but remains a family-run organization of dedicated professionals who value assisting their clients. Smith & Loveless established its industry legacy by pioneering complete packaged (pre-engineered) systems for sewage lift stations and treatment plants in the 1950s. Significant growth led to the development of a complete line of wastewater treatment and pumping equipment– and the on-going development of new products. While the equipment offerings appear to be diverse, they each retain the common traits important to Smith & Loveless’ design philosophy: superior life-cycle costs based on long-lasting, efficiently performing, and easy-to-maintain equipment. 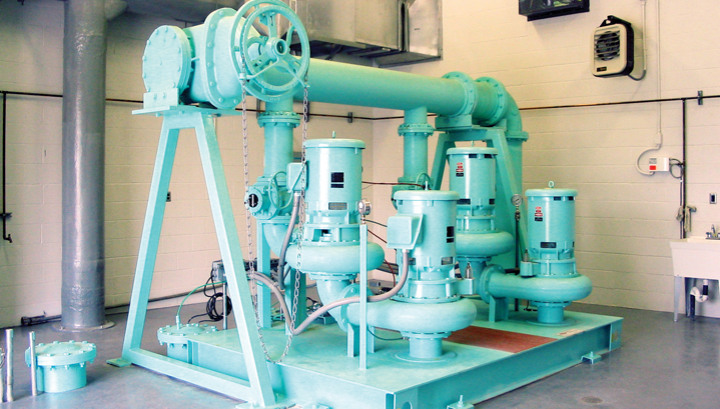 Competitive bidding induces quoting the smallest horsepower pump at the highest speed. When the smaller pump is deficient in head, a larger pump is called for nearer to shut off. However a dramatic reduction in efficiency likely occurs as it moves away from its best efficiency point. In these situations, use of vacuum-primed series pump arrangements help obtain higher pumping efficiencies – resulting in lower power costs – and potentially smaller force mains.

Series pump arrangements differ from the parallel arrangements seen in a typical duplex lift station, which comprise the duty pump and the stand-by pump. Pumps in series connect two pumps, where the outlet of the first pump leads to the inlet of the second pump. Working in concert, the flow rate still remains the same, but the heads produced by the two pumps are added.

Unlike typical submersible pumps, this unique series pump construction can be accomplished because the vertically constructed, non-clog pumps are housed outside the wet well – typically above-grade – and so each pump already comes designed with a suction flange. This enables the entire lift station to be above the wet well, thereby eliminating any need for extra valve vaults and the associated confined space concerns.

The bottom-line advantage gained in the series arrangement comes from selecting two smaller and more efficient pumps working in tandem to achieve the higher head. Even by adding the second pump, the total connected horsepower and /or resulting power consumption would still be less than what the largersingle pump can achieve at the higher head.

Consider a real example where a medium sized Midwestern town with a large residential area was served by septic tanks. Increasing problems with improper drainage and increasing nitrate levels in the groundwater prompted the city to plan sewers. Wastewater must be pumped up and over a gradually rising ridge to the sewage treatment plant in an adjacent valley. The city wanted to minimize capital costs because of limitation in their bonding capacity.

Typical parallel arrangement lift station pumps were considered, including a leading submersible pump and a vacuum-primed pump. The designer’s submersible selection required an 8-inch pump with a 88 Hp motor and a pump speed of 1770 rpm. With a six-inch discharge nozzle and manifold pumping, the pump’s efficiency measured 37 percent at the stated design conditions. The resulting brake horse power draw would be 48.7.

By contrast, the vacuum primed pump was 4-inch in size with a similar pump speed of 1760 rpm but only 50 Hp. Also with six-inch manifold piping, the pump’s efficiency measured at 40.7 percent. Brake horsepower draw would be 44.3.

The difference between the two pump scenarios would favor the vacuum-primed selection by a differential of roughly 9,585 kwh, which translates to more than $766 annually in power savings.

Yet, because of the high head application, a series pump arrangement was also considered. It was determined that smaller vacuum primed pumps in series would produce higher pump efficiency with lower connected horsepower than the single pump selections. At the same head, two 15 Hp vacuum primed pumps in series with a similar pump speed of 1760 rpm would best meet the conditions – at 68.9 percent efficiency. The series arrangement dictates two pumps serving in the duty role and two more in stand-by. Although the total connected horsepower was 60 Hp, as opposed to 176 or 10 Hp above, the 68.9 percent efficiency yields a brake horsepower draw of only 26.2 at design point.

When compared to the submersible selection, the series pump configuration was almost half of the brake horsepower draw (48.7 to 26.9). Assuming a typical eight hours running time, 365 days a year, the differential in kilowatt hours (KWH) favors the series configuration by 49,012 KWH per year. At a typical rate of $.08 per KWH, that differential translates to $3,921 annually in power savings for just one lift station!

Other savings can be accomplished as well. Series connected pumps provide for step-starting, which can reduce demand power and, thus, require smaller standby power generators. In variable speed applications using the first stage pump connected to a variable speed device, a smaller and less expensive variable frequency drive may be utilized because the series vacuum-primed pump does not need the higher degree of horsepower required by a single-stage pump.

Therefore, in high-head collection system applications, especially those with lower flows, it’s important for designers to review the pump curves for both single stage and series connected lift station pumps. Higher efficiency and less total connected horsepower can be achieved than is possible using larger and higher head pumping units. Quite often, the initial cost of the two more efficient series sets of pumps will be less than the larger horsepower, less efficient duplex set, especially when starting equipment and standby power requirements are considered.