Naylor Industries plc is a family owned fourth generation business. The Company's head office is in Barnsley, UK; it has 6 manufacturing sites across the UK: 3 in Yorkshire and one each in the West Midlands, Fife and Cheshire. The Company's origins lie in clay pipes - a product which it has manufactured for over 100 years. From this traditional base, Naylor's activities have expanded and diversified resulting in a group of substance, with interests across a broad spectrum of the building and construction industries. The Naylor group today employs some 400 people and sells a wide range of drainage and concrete products as far afield as South East Asia and Australasia.

As a supplier to the builders' merchant industry, clay and plastic pipe maker Naylor Drainage has close links with City Livery Company, the Worshipful Company of Builders' Merchants. The Livery Company last included a float in London's Lord Mayor's show in 2013; this was supported by Naylor and featured Builders' Merchanting through the ages, starting with a hand-cart and ending with a flat-bed lorry. It grabbed the attention of BBC broadcasters and featured prominently on TV. 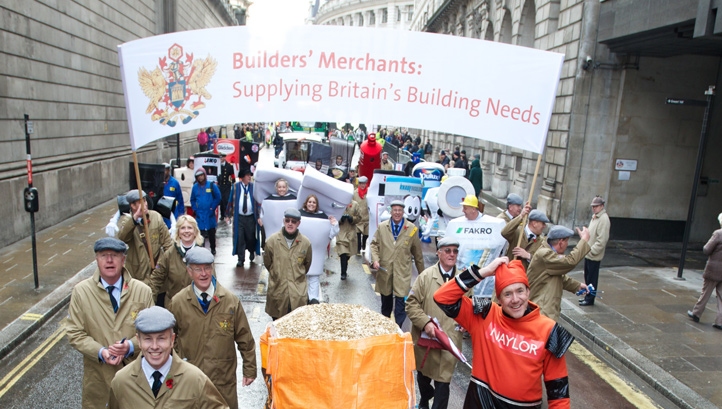 This year’s Lord Mayor’s show will be held on Saturday 12 November, and once again the Livery Company is organising a float. This year, the theme is ‘Builders’ Merchants: Supplying Britain’s Building Needs’ – demonstrating the importance of builders’ merchanting to the UK economy. The float will also highlight the many career opportunities for young people. CEO Edward Naylor and COO Bridie Warner-Adsetts will be Naylor’s representatives on the float.

The Show is one of the best-known annual events in London as well as one of the longest-established, dating back to the 16th century. Over 150 floats take part each year in a two mile procession through the City to celebrate the inauguration of a new Lord Mayor.

Crowds of people line the City's streets to celebrate the occasion and cheer the long fleet of vehicles, marching bands, spectacular floats, carriages and much more. The Show represents charities, community groups, business and Livery companies as well as Her Majesty’s Forces and the City Police. The whole event is captured live on the BBC.