Naylor Industries plc is a family owned fourth generation business. The Company's head office is in Barnsley, UK; it has 6 manufacturing sites across the UK: 3 in Yorkshire and one each in the West Midlands, Fife and Cheshire. The Company's origins lie in clay pipes - a product which it has manufactured for over 100 years. From this traditional base, Naylor's activities have expanded and diversified resulting in a group of substance, with interests across a broad spectrum of the building and construction industries. The Naylor group today employs some 400 people and sells a wide range of drainage and concrete products as far afield as South East Asia and Australasia.

Barnsley based Naylor Industries is competing for the title of 'National Public Champion' in this year's European Business Awards as the public vote opens for the first time. 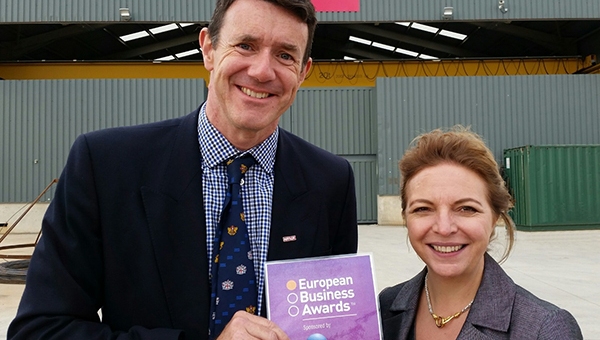 Barnsley based Naylor Industries is competing for the title of ‘National Public Champion’ in this year’s European Business Awards as the public vote opens for the first time.

The company, already named as UK National Champion in the independently judged part of the competition, has posted a video of its company online at www.businessawardseurope.com giving a powerful insight into the story of their business and its success.

Competing against all other country National Champions for the public vote, the company with the most votes will be named ‘National Public Champion’ on 7 March 2016. The first phase of online voting is open from 11 January to 26 February 2016.

Naylor CEO Edward Naylor commented: “With just over seven weeks for people to vote online for their favourite company, we are hoping that the public will watch our video and vote for us. The public vote will hopefully provide existing and potential customers and other stakeholders with an opportunity to express their approval of our success.”

The second public vote will see all of the National Public Champions from 32 different countries compete against each other to become the overall European Public Champion. The voting for this takes place between 7th March and 26th April 2016, and the result will be announced at the European Business Awards Gala event in June 2016.

Adrian Tripp, CEO of the European Business Awards said: “Last year the public vote generated over 170,000 votes from across the world.  It is a very important part of the Awards as it gives these entrepreneurial companies another way of showcasing their achievements.”

He continued: “So we ask everyone wanting to support their country or business in general to take some time, watch the videos, and cast their vote.”

Separately, the independent judging panel in the European Business Awards will review and score all the video entries plus written entries and select a final top 110 Ruban d’Honneur recipients who will face the judging panels in the final stage of the competition. The overall winner from each category will then be announced at the same time as the European Public Champion at the Gala Event in June.

The European Business Awards was created to recognise and promote business success and support the development of a stronger business community throughout Europe. The awards’ main sponsor is RSM; additional sponsors and partners of the Awards include ELITE, the UKTI and PR Newswire.

In the 2014/15 competition, all EU member markets were represented plus Turkey, Norway, Switzerland, Serbia and the Former Yugoslav Republic of Macedonia. Their combined revenue exceeded €1.5 trillion, and together they generated profits of over 60 billion Euros.