When the existing sewage treatment plant at a picturesque holiday park in Somerset needed replacing it was important to find a low-maintenance, low-noise alternative. The family-run Home Farm Holiday Centre is sited in a wooded valley at the foot of the Quantock Hills above the historic bay of St Audries. The new treatment plant needed to provide robust and reliable treatment for static caravans and chalets with a population equivalent of 1,000 and be able to cope with up to 99m3/day flow. 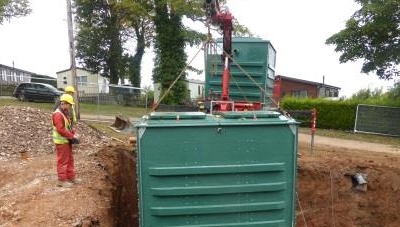 The previous treatment plant at Home Farm was a distribution system installed in the 1950s, which had reached the end of its natural life. Since it was first installed the number of holidaymakers using the centre had grown considerably and there had been issues with odour.

David Trump said: "It’s a very unusual site. The treatment system had to be robust enough to withstand seasonal variation in flows. When the park is full in high season the rate can be as high as 99 cubic meters a day.”

The two WPL HiPAF tanks were installed below ground. A flow splitter, installed between the HiPAFs and the primary tanks separates the effluent into two streams, allowing the operators to switch between the two HiPAF systems or to use both at once, subject to load.

Hundreds of tons of recycled railway ballast was used to support the new underground structures.

The Environment Agency stipulated the treated effluent, which is released into St Audries Bay, should achieve a maximum of 40g/l biochemical oxygen demand (BOD) and 60g/l suspended solids (SS).

As the treatment site was close to a number of static caravans it was important to create a replacement plant which was low on noise and odour. The Nethercott family, which own the Home Farm Holiday Centre, wanted the installation to take place with as little disruption to the natural environment as possible.

Access to the site was through an 800m avenue of trees with an extremely tight turning arc for vehicles to negotiate. The contractor WCI of Somerset also had to find a way of installing the new plant without any loss of service to the inhabitants and visitors to the park.

Dominic Hamblin, Technical Sales Manager of WPL said: "The beauty of the HiPAF is that it offers a very robust and reliable treatment system based on the submerged filtration process, which can be installed in such a way that it can deal with both high and low levels of flow while meeting required treatment standards.

"WPL specialises in custom-design packaged plants, which mean they can be manufactured off-site, in such a way as to meet the specifications of the contractor. In this case it was important for the units to be highly portable and compact so they could be transported through the site with the minimum of disruption to the surrounding environment.

"The small footprint and ease of installation of these units can save valuable time in a job as complex as this one at Home Farm. Once in operation the HiPAF is easy to maintain with low operating costs – which means it will pay dividends for the owners in years to come.”

"The extra large control kiosk fitted at the Home Farm centre houses two blowers, one for each HiPAF, and has acoustic lining fitted as standard.”

Installation of the new treatment plant was carried out in November 2015 and took three weeks. Preliminary testing suggests the new plant is exceeding the environmental standards set, with treated effluent achieving 10g per litre BOD and 20g per litre SS. Operating noise levels have successfully been kept to a minimum with readings measuring less than 50 decibels at a distance of 10m from the control kiosk.

Dibby Nethercott, one of the owners of the Home Farm Holiday Centre. said: "Replacing our treatment plant, which was installed in the 1950s, was a major operation which was expertly managed from start to finish by David Trump of WCI. We were very grateful to Mr Trump for introducing us to WPL and suggesting the HiPAF, which is now at the heart of our new treatment plant.

"The new treatment plant fulfils our requirements in that it is quiet when in operation and treats effluent to a high environmental standard. Installation of the new equipment, which arrived from WPL’s Hampshire plant on four low-loading lorries, went without a hitch and thanks to careful planning was performed with a minimum of disruption to the unique and peaceful environment of this beautiful and special place.”