A storage yard and delivery depot in Hampshire was fitted with a specially designed packaged treatment plant when the existing system could not cope with extra demand. Lenham Storage Yard in Andover, which operates as a hub for deliveries for high street stores, needed additional wastewater treatment when the business expanded. 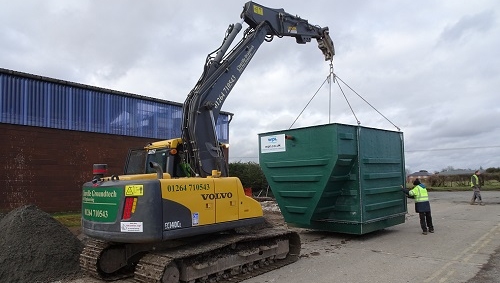 Robert Simspon, Director of Clanville DrainTech, said: “The treatment plant at Lenham Storage Yard was far too small for what was required.  The soakaway was backing up and there were persistent problems with odour.

“Initial estimates suggested the existing plant would need to be replaced with a system three times as big. But by splitting the flow and using the Eco Midi as a supplementary plant to serve the canteen, which is the busiest area, we were able to leave the existing system which was only ten years old, to serve the warehouses. This saved money for the client, while providing a high level of treatment.”

The new package plant supplied by WPL was the HiPAF Eco Midi – a model added to the WPL range last year, which serves 60 – 150 PE.  The Eco Midi gives enough additional wastewater treatment to continue to serve the storage yard even if the business expands further.

WPL has 25 years experience of manufacturing package treatment plants and is known for its robust and reliable process. The company specialises in custom-made plants, which can be adapted according to the particular needs of the client.

The HiPAF Eco Midi at Lenham Storage Yard had to be fitted 1.5m below ground in order to connect with the existing pipework.  As the new packaged plant was fitted underneath an access road, WPL initially fitted the plant with a temporary cover which allowed the contractors to create a custom-built reinforced concrete cover and specially strengthened access hatches.

“In this case, because of the depth of the site and because it was below a trafficable area it was better to allow the contractors to create a reinforced cover for the plant.  As well as giving the client exactly what was needed it also meant we were able to deliver the HiPAF Eco Midi for a lower overall cost.

“The flexible design of the HiPAF Eco Midi allows contractors to create their own treatment plant and to install a package plant which is economical, and which fits what it required, without compromising on the level of treatment.

The HiPAF Eco Midi was added to the WPL range last year in order to complement the range of package plants available.  Serving a population equivalent of 60-150 it is larger than the HiPAF Compact and smaller than the HiPAF Midi.  Typical uses include schools, hotels, golf courses, industrial sites and visitor centres.

Robert Simpson of Clanville Draintech said: “In this case the Eco Midi HiPAF was just the right size for what was needed.  It meant the client could keep the existing system, which was only ten years old and had not reached the end of its natural life.

“The Eco Midi will also be energy efficient in use. The control panel is fitted with three blowers to cope with maximum flow but only one of will be working at night-time, when demand is lower.”

The new plant was fitted in February 2016.  Installation took around three weeks.

Alan Page, Maintenance Manager, of Lenham Storage said: “The new plant is working well and we no longer have problems with odour and back up.  We are very grateful to contractor Rob Simpson for introducing us to WPL.