A newly patented submerged aerated filtration (SAF) configuration for wastewater treatment, developed by Hampshire-based WPL, can cut energy use by 40% and be retrofitted into full-scale sewage works. WPL has undertaken a fundamental enhancement of its SAF process, with emphasis on changing the media to ensure a slow circulation in the tank. 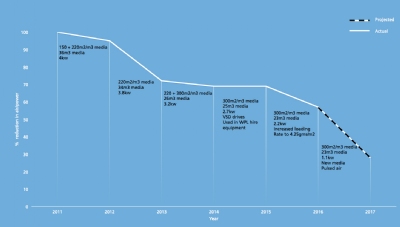 By altering the specific gravity, using a higher surface area biomedia and undertaking a hydraulic redesign of the SAF, WPL engineers have ensured that the media now moves slowly, removing the need for scouring. This also enables a reduction in process air as oxygen transfer is improved.

This latest research and development initiative is part of a drive to look for ways to improve energy use, which could make it possible for WPL to halve the overall amount of energy used by its plants and bring through-life costs in line with those for rotating biological contactors (RBC). This is one of the first steps of a three-year programme to reduce power consumption.

WPL technical director Andrew Baird says: “Over the last three years the company has been looking at the way the media works inside the tank and the way this can be made more efficient. Implementing this latest research has enabled us to cut the energy taken to run our plants by between 35 and 40 per cent, which is a huge benefit for our customers.”

Due to the hydraulic redesign and alteration of the specific gravity of the media when coated with biomass, the media sinks to the bottom of the SAF tank, where the process air is introduced. The air cleans off the biomass enabling the media to rise again, carrying sloughed off sludge with it.

Trials at Cranfield University and with a major UK utility suggest that application of the new media, combined with the hydraulic design of the SAF, removes the need for regular scouring by preventing sludge build-up in the tank.

The self-cleaning media has a much larger specific surface area. This means the physical footprint of a traditionally configured biozone can be reduced by 33% - impacting on power consumption by the same percentage.

Andrew Baird, who is also Convenor of British Water’s Package Treatment Plant Forum, says: “The key to the new process design is ensuring that the media moves slowly around the tank without the need for energy. When the media becomes coated with biomass it is naturally heavier so falls to the bottom of the tank where the process air from the diffusers clean off the biomass making the media float.”

He continues, “The circulation within the tank prevents sludge build-up both in the tank and on the media, allowing a higher specific area to be used in highly BOD-loaded applications. This significantly reduces design parameters and directly reduces energy use.

“Unlike other technologies using submerged media, WPL’s SAF plant can be filled in varying ratios for specific applications up to 90% of the available volume whilst still maintaining performance. The system uses gravity rather than electrical energy to scour the media and bring solids that would normally settle in the biozone to the surface where a cross-current carries it forward in the process.”

Reducing energy use is increasingly important for UK utilities – which are moving towards calculating the cost of investment based on Totex – combined capital and operating expenditure, which includes total energy use over the expected life of an asset.

In its commercial and industrial plants WPL has already successfully introduced media with an optimum surface area greater than the 150m2 / 220m2 per cubic meter commonly in use in the UK water industry, giving an ideal fill-to-retention volume.

WPL has found using smaller media with a higher surface area is 33% more efficient at removing pollutants measured by biochemical oxygen demand (BOD).  Increasing the surface area of the media within the SAF unit has also allowed WPL to build plants with a smaller footprint – reducing overall costs.

Another energy-saving innovation can be attributed to the self-cleaning nature of the media. The hydraulic profile has allowed smaller multiple blowers to be used. These can be turned off or switched to pulse during low diurnal flow. Trials being carried out with a large UK utility are expected to show a further significant energy saving from intermittent operation of blowers, with results due in 2017.

In WPL’s drive to improve efficiency and experiment with SAF design, the company’s Engineering Manager Tim Holloway has carried out extensive research into the hydrodynamics inside its SAF systems at Cranfield University to identify and measure the hydraulics within the SAF process.

As well as using the research to make its own plants more efficient, WPL is working with a major utility to retrofit one of its treatment plants with the redesigned media. The company is looking to retrofit other SAFs to increase asset performance without needing to replace tanks that are already in the ground.