Doosan Enpure sponsored the 'National Women in Engineering Day (NWED)' event which was held on 23 June 2015 at the Birmingham City University. The university organized a one day workshop at their city campus and invited budding female engineers from High Schools from across the Midlands to attend for a day to compete for the prestigious title. 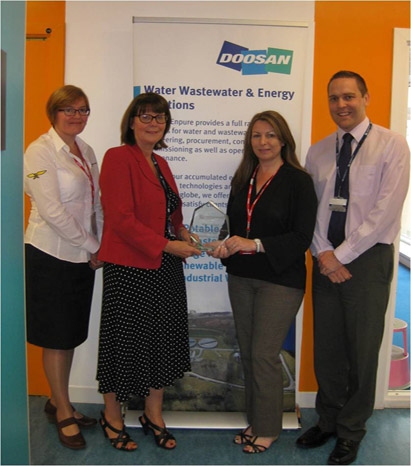 Doosan Enpure was delighted to be involved in the event which comprised of a series of fun workshops inspiring teenage girls to follow a career path into engineering.

The event, which proved to be a huge success, was aimed to inspire the girls, aged 12-13, and to deliver an understanding as to the opportunities available to them into what may sometimes be seen as a more male career and to open their minds to the options available within the engineering industry and potential future career paths. Recent STEM Statistics 2015, highlight that only 6% of the engineering workforce in the UK is female, which is behind other countries, in China for example women make up one third of the engineering workforce.

Michelle Macleod (Principal Mechanical Engineer at Doosan Enpure) attended the workshop to share her knowledge and to give an inspirational talk to the girls. She was also around to provide some mentoring expertise to the teams for their problem solving challenges competition and also to give an award of a Doosan trophy to the winning team. She was able to share her experience of working in the industry from a female perspective and to make the girls aware of the possibilities available to them for their future career.

Michelle commented "I was delighted to be asked to participate in such a well run and motivational event, the girls all fully embraced the day and there was certainly some very creative minds in the competition. It was great to talk to the girls and to see such enthusiasm, there was a real buzz in the air, and hopefully some of them will go on to follow a career in some aspect of engineering."

The event was also attended by Tony Amato (R&D and Technology Manager) who has worked closely with Birmingham City University. He was part of the judging panel and was amazed at the high level of creative thinking. The award was scooped by students from St Alban's Academy in Birmingham, who came up with a very innovative solution to the challenge.

The event is part of a national campaign, for more information see http://www.nwed.org.uk/