Since 2003, Flood Control International has been Europe's leading flood protection specialist. We design, supply and install the largest range of flood barriers, flood gates, flood doors and flood proof glazing for commercial, utility and retail applications. Our installations are individually designed for flood depths up to 4.5m and can be automated to operate independently as required. We supply flood barriers, flood doors and floodgates globally from America to Australia and from Thailand to Saudi Arabia. From slot-in flood barriers to flip-up barriers, flood proof security doors to drop-down barriers we can meet your requirements. We also design and supply a range of contamination containment barriers to prevent water course pollution from chemical and oil spillages and fire fighting water run-off.

The Royal William Yard was built between 1826 and 1835 as victualling depot to keep the Royal Navy stocked with food, drink and weapons. 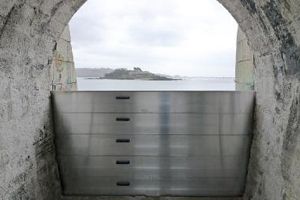 It is Grade I listed and extends to about 16 acres. As part of its original design, a tunnel was made in the south east retaining wall to allow for loading and unloading in Firestone Bay when there was an ebb tide or north-west weather. The tunnel was blocked at some point, but was opened again as the Royal William Yard started to be rejuvenated.

The area's changing weather patterns forced the owners, Urban Splash, to invest in flood barriers to prevent seawater flooding during high tides and storms. In 2012 Flood Control International fitted demountable aluminium and steel flood barriers that could be erected and removed easily.

The severe storms of early 2014 brought a sea swell that was perfectly aligned to give maximum wave impact on the flood barriers. These extraordinary weather conditions showed that the 1.5 metre high flood barriers were effective in keeping the waves from breaching the tunnel entrance.

Since the storm, it has been decided that higher flood barriers would be a prudent investment against any future unprecedented weather.