We are suppliers to the global utilities industry of products and services for the minimum-dig repair, replacement and decommissioning of underground pipes. We are the UK's leading producer of PE pipe coil trailers and pipe pushing machines used for sliplining and pipe insertion. We have developed patented techniques allowing the live insertion of gas mains and services as well as methods of flowstopping,sealing and decommissioning all types of pipe

Morrison Utility Services, who hold the joint Western Gas Alliance contract alongside Amec, were recently contracted by Wales & West Utilities to carry out 3.6 kilometres of gas mains renewal in Cheltenham. 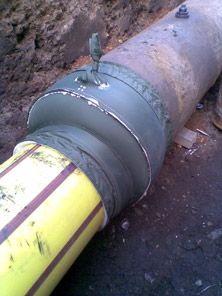 The company decided to use the Live Mains Insertion (LMI) method of replacing the cast iron mains by inserting new PE pipe whilst the gas still flowed, thus minimising disruption and speeding up the project by almost 30%.

The project, started in June 2009, was initially estimated to be completed within 75 weeks using the Dead Insertion technique on the larger diameter sections. By using the Live Insertion method throughout, the time taken has been reduced to just 53 weeks.

Martin Keer, Morrison Project Team Leader, said, "I've used LMI for years on standard size replacements, but I'd never used it before on large diameters. Having talked to a colleague in Bristol, we decided to try LMI on the larger diameter sections and it was a great success. As a result, we saved months by carrying out the jobs using live insertion instead of throwing the mains dead before inserting the PE and there is no doubt that the materials used worked out cheaper, especially taking into account the saving on Iris Stops."

The 3.6 kilometre project involved mains renewals in seven locations around the city, including 812 metres of 355mm PE in an 18" main in St. Paul's Road which involved the connection of 200 services. This section was achieved in three separate pushes - 375m, 312m and 125m - and was completed in 12 weeks.

In Cleveland Street, it took just four weeks to LMI 230 metres of 18" main with 400mm PE. As the work here coincided with the 2010 Cheltenham Festival in March and the enormously popular Gold Cup race, it was particularly important that traffic disruption was kept to a minimum. The fact that Live Mains Insertion requires only one excavation to be open during the insertion process helped to avert increased traffic congestion.

LMI is a technique pioneered by Steve Vick International Ltd. In traditional 'dead' insertion, the gas is turned off during the insertion meaning that customers can be 'off gas' for a considerable time, especially if unforeseen problems are encountered.

In 'live' insertion, gas flow is maintained to customers using a special gland box whilst the PE is pushed into the old main. The supply is turned off for the brief time it takes to connect services to the new main. This connection of services can also be carried out at a later time to suit the contractor and gas consumers - an important benefit for city centre commercial customers.

Steve Vick International supplies all the equipment and consumable products - including seals and expanding foam sealants - used to carry out the Live Mains Insertion procedure.

In Cheltenham, Morrison Utility used Steve Vick's 500mm Pipe Pushing Machine to speed up insertion of the PE pipe into the host main and ensure a safer environment for operators and passers. The company also provides full technical support including on-site support when required.

Gwyn Reed, Morrison Operations Officer, said: "By carrying out the entire project in Cheltenham using the LMI technique, we have completed the work almost five months ahead of schedule and within budget. There is no doubt we will be using LMI on large and smaller mains as often as we can in the future".